Espen D. H. Olsen has published a chapter on Norway’s approach to migration and asylum in the book The EU Migration System of Governance, which collects final findings from GLOBUS researchers. 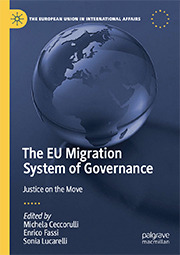 This book explores the norms, practices, and main actors in the EU Migration System of Governance (EUMSG). Bringing a fresh perspective to the analysis of asylum and migration in Europe, the volume unpacks the European Union’s approach to migration and points to the principles and actions of EU member states. Moreover, it explores the EUMSG’s performance through the lenses of three alternative yet coexistent understandings of justice (non-domination, impartiality, and mutual recognition), thereby overcoming a unilateral ethical viewpoint and moving away from the ‘open-closed borders’ debate.

As any territorial state, Norway is part of a system of states, with effects on the logic of membership and gatekeeping on access to the territory and to residence. This system has, however, become more ‘porous’ with supranational actors such as the EU, international legal obligations and increased interconnectedness in cultural and economic terms transforming the nation state.

The Norwegian migration system has become increasingly complex in terms of ‘insiders’ and ‘outsiders’ as a result of the Europeanization process from the 1990s onwards. Despite an immigration ban from 1975, there is considerable economic migration to Norway due to the principle of free movement and non-discrimination in EU and EEA law. Parallel to this thrust of Europeanization through individual rights, Norway has also become increasingly integrated into the European asylum system through implementation of both the Schengen Agreement and the Dublin Regulation. In addition, decision-making bodies and governmental agencies take heed of European best practices in the execution of Norwegian (and European) asylum rules. This was especially visible in the technocracy of providing information on safe country decisions for the return of migrants. This chapter analysis argues for a certain form of ‘agencification’ in this sense, where ethical issues of migration are funnelled out in a turn towards a more bureaucratic form of asylum processing. Such rule-oriented migration practices are not unjust at the outset, but this opens up a discussion of whether individual cases become submerged under ‘groups’ or ‘collectives’ in, for instance, return policies, as these become based on country reports. In this sense, Norwegian migration practice straddles the analytical divide between different conceptions of justice. The territorial logic of migration control necessarily points towards justice as non-domination. Still, in terms of economic migration there is a movement in the direction towards justice as impartiality in the equal treatment and non-discrimination principles for EU and EEA citizens. On the other hand, parts of asylum policy clearly stand in the way of realizing the more demanding notion of reciprocity in the conception of justice as impartiality or mutual recognition.

Espen D. H. Olsen
Norway’s Approach to Migration and Asylum as a Non-EU State: Out, But Still In