John Erik Fossum has contributed with a chapter on Norway’s relationship with the EU in the book Euroscepticism and the Future of Europe. 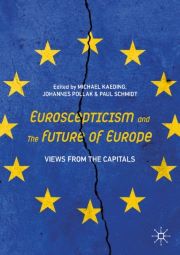 Euroscepticism and the Future of Europe sheds light on how the increasing prominence of Eurosceptic and nationalist parties is having an impact on the thinking of mainstream parties, their representatives in the European Parliament, and the future of Europe. It provides perspectives on the future of the European project from authors in all the EU Member States, as well as neighbouring European countries and potential applicant nations.

With many Eurosceptic parties now in national government or exerting influence over the national debate, this book maps and analyses the nature and impact of Euroscepticism and nationalism in the different party systems of Europe. As national political parties are the gatekeepers of the process of political representation, they play a pivotal role in mobilizing civil society and in setting the political agenda. They shape politics at a national level, but also determine the way in which Europe plays out—or does not play out—as a political issue. Thus, it is from the national capitals that the very future of Europe emerges.

Norway has held two popular referendums on EU membership, both arranged after the negotiations had been completed. In both instances, a small majority of the population turned down EU membership. The question of Norwegian EU membership has figured as one of, if not, the most politically divisive issues in Norway, at least since the Second World War. Nevertheless, Norway’s approach has been to seek as close an EU association as is possible for a non-member. What is particularly puzzling is that the present situation of extensive and dynamic Europeanisation has evoked so little political conflict and controversy. The question is whether Brexit will affect this situation.

John Erik Fossum
Norway: Outside, But …

In: Euroscepticism and the Future of Europe. Views from the Capitals
Michael Kaeding, Johannes Pollak and Paul Schmidt (eds)