From Humanitarian Needs to Border Control: Norwegian Media Narratives on Migration and Conceptions of Justice

Espen D. H. Olsen and Ragnhild Grønning explore different narratives on migration in Norwegian newspapers in a new article in the International Spectator. 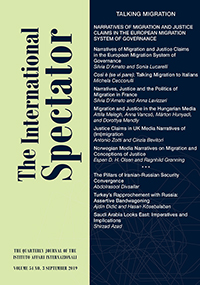 Migration is a topic that has frequently been present in political debates and the mass media in recent years, especially following the European and EU migration and refugee crisis. Newspaper debates in Norway presented different narratives with different conceptions of global justice. Migration is by definition a cross-border issue that has a direct effect on the interests of states as well as individuals, therefore the question of global justice is highly relevant. Three core media narratives were present: the humanitarian, the statist, and the EU integration narrative, which particularly highlights Norway as an integrated non-member of the EU. In the humanitarian narrative, a notion of impartiality of universal individual rights was prevalent, while in the statist narrative and to some extent in the EU integration narrative, a territorial and state-oriented conception of justice as non-domination was visible. Concerns about human rights were prevalent mainly in matters far away from Norway, but less so when the so-called migration crisis hit Norway directly.

From Humanitarian Needs to Border Control: Norwegian Media Narratives on Migration and Conceptions of Justice