The Maritime Turn in EU Foreign and Security Policies

This book by Marianne Riddervold explores the recent maritime turn in EU maritime foreign and security policies, focusing on the aims, actors and mechanisms of integration across a variety of cases. 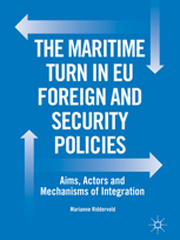 This book provides the first substantial treatment of the maritime foreign and security policies of the European Union. Its findings add to the literature by a comparative, theoretically informed analysis of EU maritime foreign and security policies across five cases: the EU’s Maritime Security Strategy and action plan; the EU’s two naval missions, Atalanta and Sophia; EU Arctic policies, and; EU policies towards the Maritime Labour Convention. Focusing on the aims, actors and mechanisms of integration in these cases, the book speaks to the three main debates in the literature on EU foreign policy, including whether it has a particular normative dimension that makes it different from foreign policy as it is conventionally understood; the extent to which policy-making in the domain has developed beyond intergovernmental cooperation and, interlinked; how EU foreign and security policy integration and its characteristics can be explained. In doing this, the book also addresses a fourth contemporary scholarly debate linked to if and how the EU is affected by crisis. By focusing on maritime security policies the book also adds to the international relations literature more broadly.