The EU's Role in the Ukraine-Russia Crisis

Mai'a K. Davis Cross is one of the editors of the special issue of the Journal of Common Market Studies devoted to understanding the EU's response to the crisis in Ukraine. To what extent has the Ukraine–Russia crisis served as a critical juncture and catalyst for shaping the EU's power? 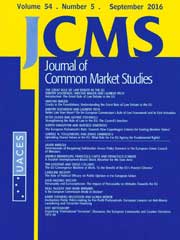 What impact has the Russia–Ukraine crisis had on the EU as a foreign policy actor? Most studies examine how the EU has evolved as an actor over time of its own initiative, but tend to discount the role that the external context or structure of the international system might play in constraining or enabling the EU's exercise of power. This Special Issue seeks to understand the EU's influence in the world through recognizing its embeddedness in an unpredictable and uncertain international system. Specifically, we ask whether and to what extent the Russia–Ukraine crisis serves as a critical juncture and catalyst for shaping the EU's power.

What Type of Power has the EU Exercised in the Ukraine–Russia Crisis? A Framework of Analysis

Arguing Sanctions: On the EU's Response to the Crisis in Ukraine
Helene Sjursen and Guri Rosén