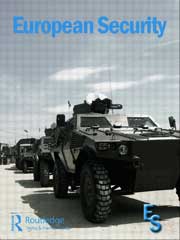 International organizations and military affairs explores the extent to which and how member states seek to control the work of international secretariats involved in overseeing military operations. The book takes a comparative approach, analysing the secretariats of NATO, the UN, and EU as prominent cases of international organisations (IOs) engaged in multinational military operations. Much of the research in this area focuses on whether IOs exercise agency of their own, beyond the preferences of member states. The book takes the literature a step further, building upon this previous understanding to investigate how member states seek to gain or keep control over IOs once delegation has occurred, focusing specifically on their secretariats. The book features evidence from 43 in-depth interviews, among numerous other sources, and involves both qualitative and quantitative analysis. This body of research sheds light on an important dimension of international delegation, and Dijkstra provides a thorough empirical treatment of three major IOs across six empirical chapters.