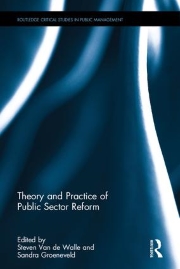 The book is edited by Steven Van de Walle and Sandra Groeneveld.

Aimed at academics, researchers and advanced students, this edited collection brings together many of the most eminent academics in the area of Public Policy and Management. It seeks to link to theory in part one and insights into specific thematic areas in part two, offering readers a display of theoretical perspectives to look at public sector reform.

How important are institutions of government and what are their ordering effects? The aim of Johan P. Olsen's chapter is to contribute to a research agenda and theoretical understanding of political-administrative organisation and organising. Based on an institutional approach, the chapter asks what explanatory power established institutions have, compared to actors and deliberate design and the wider societal conditions, when it comes to public sector reform.

A common assumption is that institutions are excessively static and that institutionalism cannot make sense of change because it is overly structural and does not grant purposeful actors a proper role. Olsen argues that this is mistaken. An institutional focus does not deny the importance of political agency. The chapter introduces two competing perspectives to institutionalism – an actor-centered and a society-centered approach. Then it outlines an institutional approach, and discusses what such an approach may contribute in an era of comprehensive European reforms.