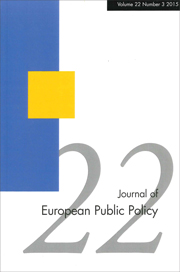 Benjamin Leruth is guest editor with Christopher Lord of a special issue of the Journal of European Public Policy entitled 'Differentiated Integration in the European Union'.

The existing literature on party and government preferences on Europe mostly focuses on the integration process as a whole. In addition, studies of party-based Euroscepticism tend to offer competing typologies that present some terminological problems. With the increase in differentiation and the potential for disintegration, it is now important to deconstruct support for European integration per policy area. Accordingly, the main purpose of this contribution is to solve problems of existing conceptualizations of élite-based Euroscepticism by presenting a specific operationalization of support for European integration.

Based on a qualitative analysis of party documents and élite interviews, such operationalization focuses on policies and policy areas where differentiation takes place, using a scale ranging from full opposition to full support for integration and taking into account internal divisions. This operationalization is then applied to three Nordic countries that have experienced different levels of (differentiated) integration since the early 1990s: Finland; Sweden; and Norway. The contribution concludes that whereas existing categorizations of Euroscepticism are useful to broadly understand élite preferences, operationalizing support for European integration per policy area where differentiation takes place can help understand the mainstreaming of Euroscepticism and offers a more accurate way of understanding new situations where parties supporting and opposing participation in European Union policies co-exist in coalition governments.