Espen D. H. Olsen contributes with a chapter on European citizenship in the Handbook of Political Citizenship and Social Movements. 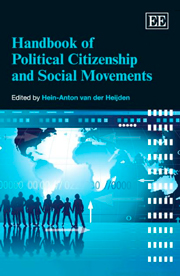 Olsen outlines three main approaches to the study of citizenship. Focus is on theoretical questions regarding its viability, historical and institutional accounts of its incremental development, and normative issues as to the desirability of forging citizenship outside the nation state. He finally addresses the link between the rights of European citizenship and social movements, with special emphasis on the potential of political and social mobilization of citizens in times of crisis.