Agustín José Menéndez has published an editorial in the European Law Journal entitled 'A European Union in Constitutional Mutation?'. 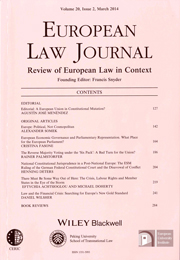 Agustín J. Menéndez, editor of the European Law Journal, discusses the fundamental changes in European constitutional law resulting from the several overlapping crises since 2007. Outlining these constitutional changes and innovations, he concludes that the process of EU democratisation has been not only halted, but runs a serious risk of being reversed. Power has shifted towards the least representative institutions, at the same time that equality between member states has been seriously compromised. Menéndez also considers how the role of law as the key means of European integration is being seriously challenged.

The need for 'law in context' analyses

'At the time this editorial is being written, most European politicians and a good deal of the pundits claim that the worst of the crises is over. There are perhaps very good reasons to think that the present (and relative) calm is more apparent than real (a phoney calm, if one may be allowed). The underlying economic, financial, fiscal, macroeconomic and political weaknesses that exploded into several, overlapping and mutually reinforcing crises have been barely dealt with. But even if the politicians and the pundits were right, the EU now is rather different from the EU that was before the crises started.

This means that there is a major task for European legal and social scholars, and in particular for this journal, to fulfil. At times like this, ‘law in context’ analyses reconstructing how the structural and substantive content of European law changes and how law as a means of social integration evolves are more needed than ever. As the ‘governance’ turn and the radical variants of constitutional pluralism fade away, it is perhaps time to engage more seriously with democratic constitutional theory, sharpened and tested for decades in national Social and Democratic Rechtsstaats, and to dig even further into the historical and economic context of European law. Perhaps it is the right time to grant to David Hume that what is relevant is not so much whether ideas are out of the common road or not, but whether they are good or bad' (p. 139).