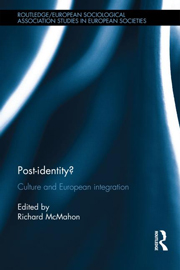 Collective identity, the emotionally powerful sense of belonging to a group, is a crucial source of popular legitimacy for nations. However efforts since the 1990s to politically support European integration by using identity mechanisms borrowed from nationalism have had very limited success. European integration may require new, post-national approaches to the relationship between culture and politics.

This controversial and timely volume poses the logical question: if identity doesn't effectively connect culture with European integration politics, what does? The book brings together leading scholars from several of the disciplines that have developed concepts of culture and methods of cultural research. These expert interdisciplinary contributors apply a startling diversity of approaches to culture, linking it to facets of integration as varied as external policy, the democratic deficit, economic dynamism and the geography of integration.

This book examines commonalities and connections within the European space, as well as representations of these in identity discourses. It will be useful for students and scholars of sociology, geography, anthropology, social psychology, political science and the history of European integration.

Defining the EU through enlargement

In her chapter, Helene Sjursen seeks to shed light on the EU's identity problem by investigating justifications for past enlargements. What kind of understanding of the EU do enlargement decisions indicate? Given that the EU is based on more than mere pragmatic problem-solving, the question is whether decisions to enlarge reflect a value-based or a rights-based polity. Although a certain sense of distinctiveness, certain elements of European particularities, are in evidence, the pull of universal principles has proven stronger thus far. Paradoxically, this presents the European political project with an important dilemma.

Helene Sjursen
'A Certain Sense of Europe? Defining the EU through Enlargement'