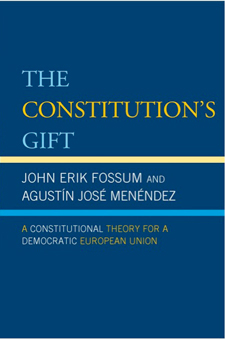 The authors consider the process of forging the EU's constitution and the set of fundamental norms that define the institutional structure, the decision-making procedures, and the foundations of the Union's democratic legitimacy.

Their analysis illuminates the distinctive features of the EU's pluralist constitutional construct but also the interesting parallels to the Canadian constitutional experience and provides the tools to understand the Union's development, especially during the Laeken (2001–2005) and Lisbon (2007–2009) processes of constitutional reform.

Similarly, it presents the European Union as one of the few examples of a polity that has transcended the paradigm of the nation-state (and perhaps even that of the state). Locating the substance and process of Lisbon in its proper constitutional context, Fossum and Menéndez explain why this should be seen as a new beginning of the Union's constitutional season, not its end.

The book does not shirk away from presenting the problematic implications of European constitutional developments, and indeed shows why the many constitutional failures of the Union are to be traced back to the tensions characteristic of the synthetic path to integration.

A Decade of Findings

The book reflects a long-term research undertaken at ARENA, and which has been reflected in several working papers and reports published on this website. But all the chapters in the book have been written in one single breadth, reflecting the sometimes perplexing findings of a decade of collaborative research.

Offering the first history of European constitutional law that is both theoretically informed and normatively grounded, this book will be of interest to all readers willing to consider in depth the process and theory of European integration.

"Historically erudite and broad in its scope, this book explains why and how essential parts of Union law have been severed from the original common constitutional template and have begun to unravel the common bond. A timely and important attempt to address the unfolding crisis." - Alexander Somek, University of Iowa

"Emerging from a masterful blend of interdisciplinary scholarship and intellectual ambition, this theoretical perspective makes visible the normative, analytical, and practical merits of a post-state and post-national understanding of the EU." - Rainer Schmalz-Bruns, Leibniz University

"The theory of constitutional synthesis is a well-argued exercise in normative realism. The authors' intense long-term cooperation across disciplines is clearly visible and has paid off handsomely." - Christian Joerges, University of Bremen

"Cogently argued and accessible to a broad audience, this volume successfully addresses many of the key issues relating to the ongoing constitutionalization of the European Union. Fossum and Menéndez offer an astute analysis that succeeds in relating European developments to constitutional trends in North America and elsewhere. Highly recommended!" - William E. Scheuerman, Indiana University

Purchase information from the publisher