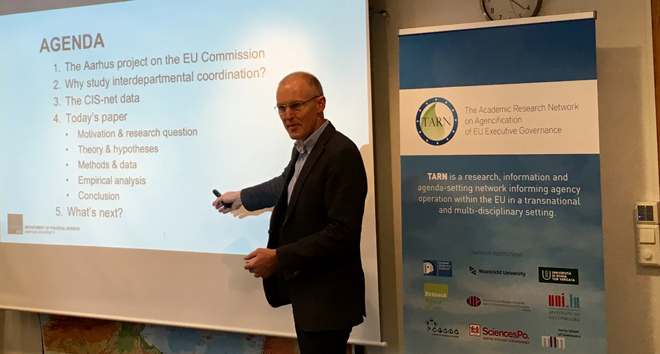 The presentation was part of the TARN lecture series. The paper, written by Jens Blom-Hansen and Daniel Finke, explores what guides the choice of coordination efforts in a large politico-administrative system like the European Commission. Based on almost 14 000 cases from the EU Commission's internal digital coordination system, the paper analyses the impact of audience sensitivity and audience scope on coordination efforts.

Jens Blom-Hansen is Professor at the Department of Political Science at Aarhus University.

Daniel Finke is Professor at the Department of Political Science at Aarhus University.

The European Commission and audience-driven coordination

What guides the choice of coordination efforts in large organizational systems? Despite Max Weber's argument that hierarchy is superior to other organisational models, modern governments are in fact not organised as one big hierarchy, but rather as a set of parallel hierarchies.The EU Commission provides promising empirical testing ground, as its top management is divided among 28 different commissioners, while its administrative part is split into almost fifty different directorate-generals and specialised services. At the same time, the Commission faces pressure from the member states, the European Parliament, and the public. The Commission's ability to manage these audiences is therefore more important than ever, and internal coordination is a prominent challenge.

From an empirical analysis of almost 14 000 cases from the EU Commission's internal digital coordination system, Blom-Hansen and Finke explores the impact of audience sensitivity and audience influence on coordination efforts. The study supports the the claim that it is important to study an agency's reputation in order to understand its behaviour. The study finds that audience concerns are important drivers of the Commission's coordination efforts. These findings depart empirically and theoretically from current research on the Commission and further develop theories of bureaucratic autonomy and reputation.

This paper uses reputation theory to address a century-old puzzle: what guides the choice of coordination efforts in large politico-administrative systems? Max Weber, founder of the modern study of bureaucracy, famously considered a hierarchy superior to other organizational models. However, modern governments are not organized as one big hierarchy, but as a set of parallel hierarchies, typically 15-20 ministries. This raises a coordination challenge, which in practice has proven surprisingly difficult to meet. Based on reputation theory we argue that coordination is part of an agency’s audience management. We investigate this argument in the European Union’s central executive institution, the EU Commission. Based on almost 14,000 cases from the EU Commission’s internal digital coordination system we analyze the impact of audience sensitivity and audience scope on coordination efforts. Our findings depart from current research on the EU Commission and contribute to the exploration of the empirical domain of reputation theory.

The lectures are organised by the TARN partners in Berlin, Florence, London, Luxembourg, Maastricht, Oslo, Paris, Rome and Vienna.

By Ragnhild Grønning
E-mail this page