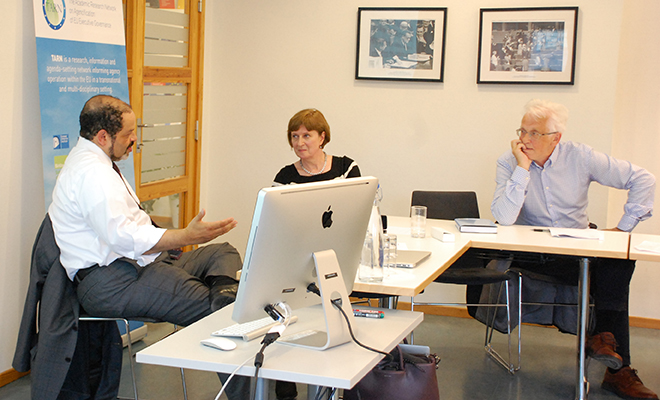 The presentation was part of the TARN lecture series. The paper describes the empirical findings of a statistical study comparing the civil servants working at the European Commission and the General Secretariat of the Council.

Sara Connolly is Professor in Personnel Economics at the Norwich Business School, University of East Anglia.

Hussein Kassim is a Professor of Politics at the School of Politics, Philosophy, Language and Communication Studies at the University of East Anglia.

Formally, staff working for EU institutions are part of a single civil service, governed by the same rules, codes and procedures. Little is known, however, about the staff profile as a whole or in terms of individual parts of the EU civil service. Questions about the suitability of staff recruited and the subsequent alignment of their values with the principles of their workplace have so far been left unanswered.

With hitherto unprecedented access, the data collection consisted of an online survey, expert interviews and focus groups. The novel approach enables us to gain a much more nuanced picture of the EU administration staff. Despite their similar backgrounds and profiles in terms of education and professional experience, their beliefs and values differ significantly.

Beliefs and values are partly formed at the workplace

The data suggests that these differences result from socialisation after recruitment – that is, at the workplace. These findings have important implications for the existing literature on socialisation in EU institutions. Rather than using pro-European values as the standard test for socialisation, Kassim and Connolly suggested that work values would provide a more appropriate measure. 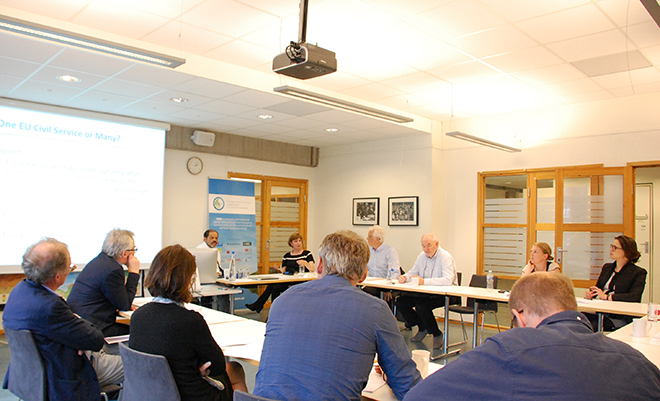 The presentation was followed by a discussion about the empirical work, such as data collection, choice of variables and data interpretation. Conceptual questions and broader implications were also discussed.

Scholarship on the EU bureaucracy has focused overwhelmingly on the European Commission. Though important, it is important to remember that institution forms only one part of the EU administration. Drawing on new empirical data from research on the Commission and on the General Secretariat of the Council, this paper compares EU civil servants from the two bodies along several dimensions. It finds that, despite similar backgrounds and profiles, staff from the two bodies differ in beliefs, values and attitudes. It argues, first, that the differences can be explained by different socialising impacts exerted by the two bodies and, second, that the comparison has important implications for the existing literature on socialization in EU institutions.

The Academic Research Network on Agencification of EU Executive Governance (TARN) will host a series of lectures featuring renowned academics and practitioners to discuss salient issues of agencification of EU executive governance.

The lectures will be organised by the TARN partners in Berlin, Florence, London, Luxembourg, Maastricht, Oslo, Paris, Rome and Vienna.