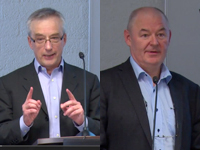 A number of academic experts from the PADEMIA network were invited to give a ‘signature talk’ to lay out the key ideas of the Erasmus Academic Network PADEMIA.

The lectures were given at a workshop on ‘Multilevel Democracy’ hosted by VU University Amsterdam in the fall of 2014.

Two lectures were held by ARENA's members of PADEMIA, Prof. Christopher Lord and Prof. John Erik Fossum. These are now available as short videos (8-13 minutes) from the PADEMIA website.