Early career researchers gathered at the EUI in Florence to discuss how large datasets on courts can advance understanding of judicial behaviour. 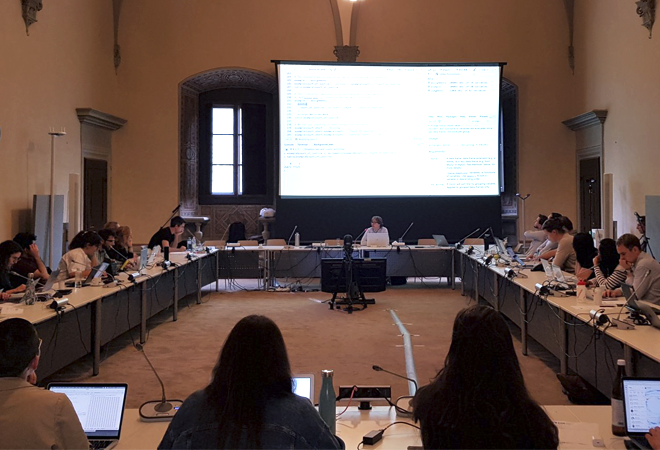 During the workshop, early-career researchers discussed the use of large databases on courts. Photo: Michal Ovádek.

Around 25 researchers met on 10 to 14 October 2022 for a workshop on large databases on courts. The aim of the workshop was to discuss the use of large datasets on the EU courts – the Court of Justice of the European Union (CJEU), the European Court of Human Rights – in addition to national high courts.

'The CJEU regularly takes decisions that impact on millions of European citizens, including workers’ rights, cross-border economic activity, migration, environment, and much more,' says Daniel Naurin, leader of ARENA Centre for European Studies, who initiated the workshop in collaboration with Michal Ovadek and Urska Sadl.

The workshop was organised by the IUROPA network in collaboration with ARENA, EUI and PluriCourts.

'The IUROPA network brings together scholars in law and political science who find that using large scale observational data can help us better understand how the Court takes these decisions,' says Naurin.

In the workshop, early career researchers were introduced to existing databases on courts in Europe and to statistical tools that can be used to analyse such data, Naurin explains.

'For example, courts produce a lot of text, and the technical advances with regards to text analysis tools has become a really useful resource for young researchers in the field,' he says.

The main advantage of working with large databases of this kind, according to Naurin, is that one can go beyond the analysis of single cases to test general theories of judicial behaviour.

The workshop concluded with a preview of the CJEU Database, the richest resource on any international court to date, featuring information on the outcomes, processes and actors involved in the decision-making of the CJEU.