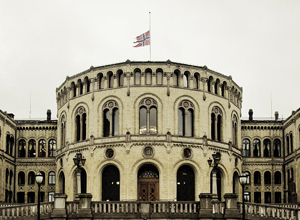 The Norwegian Parliament with the flag at half-mast after the terror attack on 22 July 2011 (Photo: Kim Erlandsen, NRK P3)

Norwegian democracy is perceived as one of the world’s most well-organised, efficient and stable democracies. The Norwegian form of government and political institutions enjoy the population’s trust. Still, three major official reports in the last decade have revealed a gloomy situation in terms of how Norwegian democracy is functioning and developing.

The Power and Democracy Study (1998-2003) concluded that democracy is weathering and that politics is on retreat. Power has been transferred to multinational corporations, market actors, independent administrative agencies and legal institutions in Norway and abroad.

The 2012 Report from the EEA Review Committee found Norway’s affiliation with the EU through the EEA and other agreements to be problematic in democratic terms. The possibilities for parliamentary control are limited. The support for these agreements, both among parliamentarians and the population, indicates that democratic considerations are not necessarily their most important priority, Olsen argues.

Together, these three independent studies have set off what Olsen calls ‘democracy alarms’, and he analyses the above paradox in his book. We must dare to debate democracy in fundamental terms, he argues.

Norway is not prepared

Olsen stresses the need to discuss the ‘big questions’. How much direct democracy should we have, how many majority decisions? To what extent should we rely on expert rule on the one hand, and on layman rule on the other? What is to be accepted as the true expression of the ‘will of the people’? It has proven difficult to agree on these questions, and these are the ‘enduring tensions of democracy’ that the author refers to.

Olsen concludes that Norwegian democracy is not sufficiently prepared for current challenges, where a complex and dynamic development is taking place both at the national and international levels. We are witnessing major changes, with demographic, migration and economic changes that could change the entire European political order.

A longer presentation of the book in Norwegian