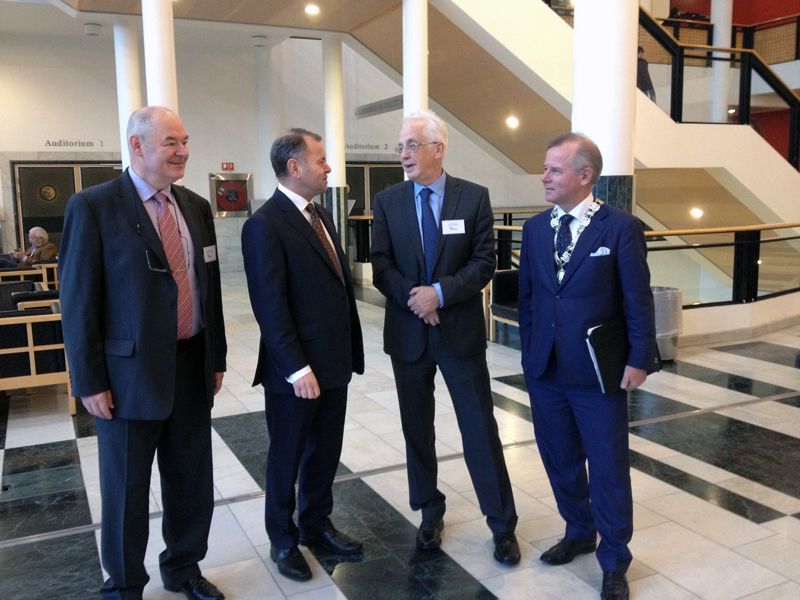 Rector Ole Petter Ottersen opened the conference, which took place on 4 November 2014 – the very same date the so-called November constitution was signed 200 years ago to allow for a union with Sweden. Ottersen looked forward to discussions about Norway's current relationship with the EU, referring to the recent ARENA book on the Norwegian paradox (Det norske paradoks), which points to democratic shortcomings of the arrangements.

President of the Norwegian Parliament, Olemic Thommessen addressed the need to highlight the constitutional challenges implicit in the current situation, with Norway being a close associate but non-member of the EU. He admitted that the EEA Agreement raises important democratic issues for Norway. Also in his view these have become particularly relevant this year, when the 200th anniversary of the Constitution and the sovereignty of the people are being celebrated.

John Erik Fossum and Agustín José Menéndez gave an introduction to the history of EU law and different models of integration. They are authors of the book The Constitution's Gift from 2010, which by Kalypso Nicolaïdis was presented as a 'must reference' to understand the constitutional system in the EU today.

Democratic challenges and the financial crisis

German law professor Christian Joerges shed light on the EU's legal status in view of the crisis. He took particular note of the controversy over the European Central Bank's program for Outright Monetary Transactions (OMT). The ECB's 2012 announcement that it would be willing to buy government bonds without limit in certain scenarios arguably constitutes the most controversial decision in its 15-year history.

In Joerges' view, it is a state of emergency today. 'We do not have the means and legislation in place to cure the Eurozone crisis', he warned.

From the audience, former Danish permanent representative to the EU, Poul Skytte Christoffersen, questioned Prof. Joerges' neoliberal story of the EU. He pointed to the EU's social-democratic agenda, which was tuned towards steering the internal market. In his view, the major mistake – which in turn has led to the banking crisis – was that the free movement of capital was not adequately controlled.

Simon Usherwood's blog on day one of the conference

Oxford professor Kalypso Nicolaïdis then gave a lecture on the potential for European 'demoi-cracy', a polity of multiple distinct people. Referring to her experience from being a 'wise man' in the Reflection Group headed by former Spanish Prime Minister Gonzalez, she moreover argued that short-termism is the key problem of democracy. Politicians are not able to think ahead, she regretted, and her term of 'sustainable integration' did not gain ground in the group, which was to reflect on Europe's challenges towards 2030.

The second session was devoted to discussing the actual options available to European states. State Secretary to the Minister of EU/EEA affairs, Ingvild Næss Stub, discussed the Norwegian government's policy towards the EU. Their strategy for increased influence is to act earlier and pick their battles. Prof. Erik O. Eriksen however underscored the democratic shortcomings of such an approach, and repeated his 'no legislation without representation' critique.

ARENA organised a conference on related topics in Brussels in June: Paradoxes of EU non-membership

Joachim Blatter explained that Switzerland seems to be turning away from Europe and towards China, and that EU membership is a non-option for the country today – also for democratic reasons. He stressed however that the Swiss are becoming more fundamentalist and a less reliable negotiating partner.

The ensuing panel debate engaged renowned, mainly legal, scholars in discussions on issues such as associate membership; British euroscepticism and the options available for existing members; challenges related to the EU's high aspirations and constitutional framing; and the challenges of talking about à-la-carte EU models, where member states can pick and mix the policy areas they want for deeper integration.

Given the current situation, the panelists to some extent understood that Norway is not considering full EU membership. However, from an outsider's perspective, Norway's affiliation through the EEA is considered an oddity.

From the political debate at Litteraturhuset (photo: Johanne Saltnes/UiO)

ARENA also invited to an evening political debate with Scandinavian parliamentarians to discuss if the current situation is taken seriously enough.

Former Danish diplomat Poul Skytte Christoffersen, who has a decades-long experience from various EU institutions in Brussels, revealed that Denmark faces some of the same problems as Norway when it comes to participation. 'The Danish opt-outs entail that one has to be a legal scholar to understand where Denmark can participate and not', he argued. In his view, it is also a moral problem that politicians nevertheless want to cooperate, but not take the responsibility.

Daniel Tarschys, former member of the Swedish parliament and Secretary General of the Council of Europe, paradoxically maintained that Norway has served as a model for Sweden in terms of democratic standards. After 20 years of EU membership, he claimed that national sovereignty has not been undermined. On the contrary, Sweden has gained more self-determination through its membership, he explained. 'It is not a zero-sum game on the separation of powers between the national and EU level'.

Photo gallery from the parliamentary debate

The conference was part of the Norwegian Parliament's official programme for the 200th anniversary celebration.

The academic conference
The parliamentary debate

Simon Usherwood's blog: Are crises good or bad for the EU?

Erik O. Eriksen's blog: The EU and the Norwegian paradox: Bicentennial celebration with an aftertaste