The background for this year’s lecture was the Norwegian Constitution’s bicentennial celebration in 2014, which coincides with the 20th anniversary of the Agreement on the European Economic Area (EEA). The two anniversaries combined make for a special opportunity to reflect on Norway’s role and place in Europe and the implications of Norway’s particular EU affiliation for our democracy and self-rule.

Vidar Helgesen is Norway's first Europe Minister and he spoke to nearly 200 university students and employees, as well as others interested in and working with European issues, at Blindern campus on 4 March.

The year of jubilees

Helgesen was welcomed by rector Ole Petter Ottersen who proudly presented the ARENA Lecture in the context of the Bicentenary of the Norwegian Constitution and the University’s own ‘Constitution Week’. The rector praised ARENA’s research and pointed to three questions asked by its director Erik Oddvar Eriksen in a recent op-ed, challenging the Minister to answer these: Is Norway captured in the ‘integration trap’? Could our EU affiliation be described as ‘taxation without representation’? Do we comply with the constitution of Norway or the EU?

Helgesen reminded that there is yet another institution celebrating in 2014: ARENA was established 20 years ago. He highlighted ARENA’s key role in contributing to a critical discussion and debate on such questions in Norway. Professor Emeritus Johan P. Olsen was particularly mentioned as one who proved the importance of Europe for Norway at an early stage.

Researchers at ARENA have recently published the book ‘The Norwegian Paradox: On Norway’s relationship with the European Union’ (in Norwegian). This book points to several problems related to Norway’s EU affiliation from a democratic perspective. Helgesen emphasized the importance of asking such questions, although there are no clear answers. ‘The discussion contributes to making us wiser’, he stated, before stressing that cooperation will always pay off over time, although it does not necessarily pay off for everyone all the time.

In his view, the characterisation of Norway’s EU affiliation as ‘democratic self-injury’, to use Eriksen’s words, is an exaggeration. He admitted however that there could be ‘elements of applying bandage’. He referred to the EEA agreement being signed by a large majority in the Norwegian parliament (Storting), and every Storting and Government has supported it ever since. In his view, the EEA agreement gives Norway the opportunity to influence law-making processes at an early stage, and he argued that the actual policies should be our main concern.

The EU has constantly changed since 1994. Today the pillar structure is abolished, the euro has been introduced, and the number of member states has increased considerably. The EEA agreement has proven to be robust and dynamic by dealing with great challenges. However, it was a response to the challenges of creating a single market in the 1980s, and is not perfect, he admitted.

Helgesen described the Norwegian EU debate as characterised by a rhetoric where the EU’s interests are opposed to Norwegian interests. In his view, this is the exception rather than the rule. ‘Our interests are generally the same as those of the EU. As a rule, EU policies are also good policies for us. And when 28 European countries come to agreement, Norway can generally also agree on this.’

‘Not always, however,’ he continued, ‘thus we must act strategically. We must identify issues that are important for Norway’. He was challenged by the audience to concretize what ‘a more active policy towards the EU’ actually means, and how Norwegian officials work to influence EU policies in their daily activities.

Helgesen pointed to some examples, such as the government instructing those who represent Norway in expert groups on our national position in a more distinct manner and at an earlier stage, emphasising that defining such positions is a political responsibility, and secondly, making more use of the parliament’s Committee for European affairs as an arena for discussing EU-related questions. The audience also displayed great interest in Helgesen’s new role as minister in charge of EEA and EU affairs, and he got the opportunity to elaborate on his mandate, institutional responsibility, and position.

Helgesen was pleased to see that ARENA and the University of Oslo contribute to increasing the quality of the debate on Norway’s relationship with the EU. A more knowledge-based debate will again contribute to increased understanding and an open debate. This will in turn lead to wiser and better decisions being taken, he argued. He agreed that there is a strong need to increase the knowledge of the EU in Norway, also through teaching in schools.

He encouraged ARENA to continue contributing to Norwegian democracy by pursuing and developing the discussions on the challenges, dilemmas and paradoxes stemming from Norway’s EU affiliation, and not least to continue asking questions.

The ARENA Lecture is a long-standing tradition at the University of Oslo. In this lecture series ARENA invites politicians and other influential persons to hold an open lecture on a topic that is both of academic and public interest.

This page in Norwegian

A podcast from the event is available here (in Norwegian)

Vidar Helgesen is Minister at the Office of the Prime Minister and responsible for EEA and EU Affairs at the Ministry of Foreign Affairs. He was Norway's first Europe Minister when appointed in 2013. 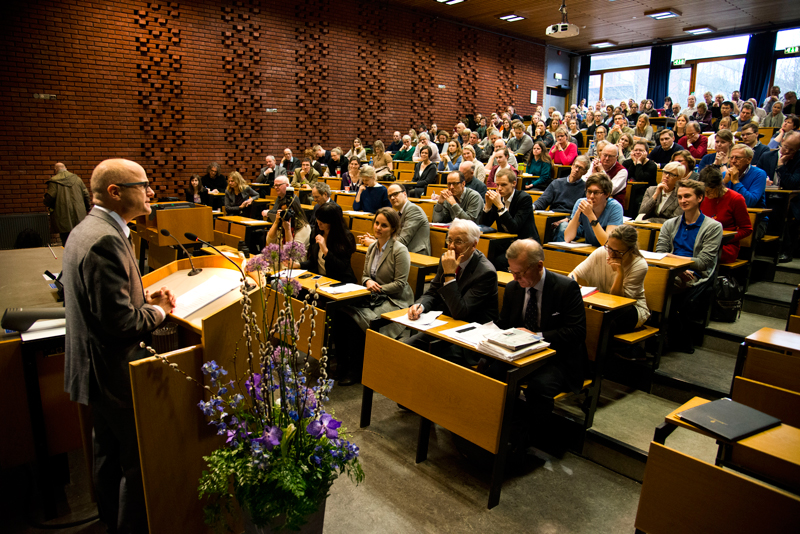