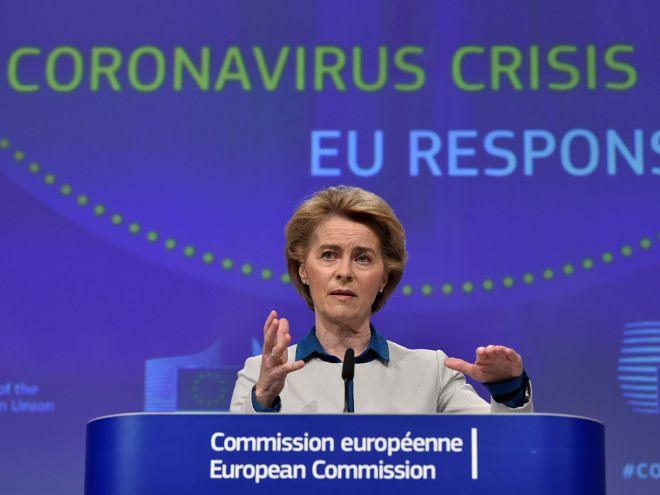 Lack of authority: The EU has been criticized for doing too little to deal with covid-19. - They have not had the authority, capacity or expertise in the field, and therefore they have not been able to do much, says ARENA researcher Jarle Trondal (Photo: John Thys, Pool Photo via AP / NTB / Scanpix)

Jarle Trondal, a Professor at the ARENA Centre for European Studies, has written a book about crises in Europe. In collaboration with Marianne Riddervold and Akasemi Newsome, the social scientist has investigated the impact of crises on European cooperation. The subject matter in their Handbook on European Crisis, due to be launched shortly, has become worryingly relevant.

'In our book we explore how the EU responded to the financial crisis in 2008, the migrant crisis in 2015, disintegration crises, like when Britain left the EU in 2020, foreign policy crises, such as when Russia annexed the Crimean Peninsula in 2014, and what we call legitimacy crises, i.e. populism and other phenomena that challenge the established system', says Professor Trondal.

He emphasises that organisations such as the EU have a tendency to draw up strategies for the future on the basis of previous crises.

'It is not my job as a researcher to gaze into the crystal ball, but there are grounds for making a number of predictions about the impact of Covid-19 based on what we already know', says Professor Trondal.

In their book the authors outline three possible scenarios for the impact crises in general might have on EU cooperation:

Italy was the first country in Europe to be affected by Covid-19, and one of the countries most severely affected. Italian Prime Minister Guiseppe Conte has since criticised the EU and its member states for their handling of the pandemic. In the absence of help from the Union, the Italian authorities had to seek assistance in the form of medical equipment and expertise from China.

The EU will adapt and find solutions based on proven strategies.

In an interview with the BBC, the Italian Prime Minister stated that Europe’s response to the crisis had jeopardised the whole union.

However, building on his knowledge from previous crises, Jarle Trondal is not worried that

the union will break up. Scenario 3 is the most likely, according to the professor: the EU will adapt and find solutions based on tried and tested strategies.

'None of the crises we have studied in our book have undermined any of the EU’s policy areas. On the contrary, you could say that the union has been shaped by crises', says Professor Trondal.

A recurring theme in the crises he has studied is that the first phase is always characterised by fear and panic.

'We fear the worst. News coverage from the initial stages of the financial crisis shows front-page stories from all over Europe predicting both the downfall of the EU and the demise of capitalism',  says Professor Trondal

While he understands the criticism raised by Guiseppe Conte and others, the ARENA researcher is not surprised by the EU’s lack of response.

'The EU has done exactly what it was supposed to do: very little. They do not have the authority, capacity or expertise in this field, and consequently they have not been able to do much. Public health falls primarily under the competence of the member states', says Professor Trondal.

He points out that the same would probably have happened in the event of a new foreign affairs and security policy crisis. Here too, the solution would primarily be a matter for each individual member state to decide, not the EU.

According to the ARENA researcher, in times of crisis and in the absence of supranational authority in specific policy areas, the EU has habitually developed pragmatic solutions in cooperation with the specialist authorities in the member states. There is a time lapse before these short-term, pragmatic solutions are loaded into the EU system, in the form of supranational regulations.

The EU system is huge, and the events of the pandemic have taken place faster than the organisation has been able to respond.

'A prime example is the financial crisis. Intergovernmental cooperation during the crisis resulted in subsequent supranational solutions'.

However, Professor Trondal maintains that this form of pragmatism is far from perfect.

'On the contrary, the EU is the sum of many second-rate solutions', says Professor Trondal.

One of the contributions to the Handbook on European Crisis, describes the process as "failing forward" within financial regulation.

'The Norwegian government is reacting in the same way as it faces Covid-19. The authorities admit that they don’t really know how to deal with the crisis and they are fumbling their way forwards', he says.

He points out that it is actually much easier to rig up a crisis solution for a small unitary state like Norway. The EU system is massive, and events during the pandemic have played out faster than the organisation has been able to respond.

'It is a heavy ship to turn. Italy was unfortunate and was hit first. The countries that come last will probably benefit more from a united, dynamic union', says Professor Trondal.

The professor says that the EU uses the crises to jointly develop contingency measures and new solutions. He cites the European Central Bank (ECB) as being one example of this.

'Before the financial crisis, the EU did not have a central bank in the true sense of the word. The ECB did exist, but during the financial crisis the bank suddenly became the "lender of last resort", lending money and securing the economic and monetary cooperation', says Professor Trondal.

Another example that could be mentioned, but which lies outside the scope of their book, is animal health. After the first cases of mad cow disease were discovered in Britain in 1986, a number of schemes have been set up in order to prevent the spread of disease from animals to humans.

'The EU has much more supranational authority and administrative capacity relating to animal health than human health. Not because the EU has an overarching strategy to prioritise animal health over public health, but simply as an after effect of an animal health crisis, namely mad cow disease', says Professor Trondal.

According to Professor Trondal, the way in which Norwegian farmers are currently supposed to handle animals is influenced by the EU’s supranational legislation and common standards on animal health specifically and food safety in general.

'We have not had a similar public health crisis previously, and consequently we have no supranational authority in this policy area', he says.

'That will come now', he claims.

All the crises investigated by Jarle Trondal and the other contributors to the Handbook on European Crisis, have resulted in new EU agencies, directorates and supervisory authorities, which have been tasked with collecting information and data, drawing up regulations and acting as supranational specialist authorities. These agencies is there to regulate the member states, but also to cooperate with national specialist authorities.

'The European Centre for Disease Prevention and Control is currently fairly weak. It has previously mainly served as an information hub, without any decision-making authority in respect of individual cases. We have reason to expect that this agency will be strengthened and be granted supranational decision-making authority', says Professor Trondal.

The crisis situation contributes to a further internationalisation of problem solving across policy areas.

According to Professor Trondal, a new infection prevention and control agency with greater capacity and more power would be a possible example of how the EU’s executive authority often develops as a consequence of crises, before becoming established more permanently. States of emergency contribute to further supra-nationalisation of problem-solving across policy areas.

'It is also likely that the European Commission will use the Coronavirus crisis to further build up existing initiatives, such as The European Green Deal, which aims to make Europe the first climate neutral continent by 2050, he says. However, the challenge lies in the fact that the pandemic has resulted in an economic crisis, which could tempt member states to "go full speed ahead" with short-term, less climate-neutral mechanisms.'

Politicisation of crisis management usually results in the mobilisation of counter-forces, according to Professor Trondal. He points out that latent conflicts in the system often rise to the surface during crises.

'There could be turbulence as a result of the EU’s response to the Coronavirus pandemic. The dividing line between the right and left wings could become mobilised and there could be increased resistance to European integration, as already illustrated by Brexit, in addition to resistance to the green shift', says Professor Trondal.

Despite the many disagreements and criticism abound, we must remember that the EU is a system accustomed to crises.

In the Handbook on European Crisis, Gary Marks, David Attewell, Jan Rovny and Liesbet Hooghe illustrate how crises provide fuel to latent identity conflicts in Europe, which in turn result in increased support for political parties which mobilise on the background of these kinds of conflicts.

'Brexit was in part the result of a classic conflict. Britain was experiencing a burgeoning centre–periphery conflict, with widening divides between urban and rural communities, between local and central, between the socioeconomic elite and the 'grassroots'. This conflict contributed directly to Brexit', says Professor Trondal.

According to the ARENA researcher, the EU is also a handy scapegoat when national politicians and voters want someone to blame.

'Despite the many disagreements and burgeoning criticism, we need to remember that the EU is a system which is accustomed to crises. The Union has proved to be surprisingly flexible, and not least a highly resistant system when faced with both legitimacy challenges and economic downturns', Professor Trondal says.