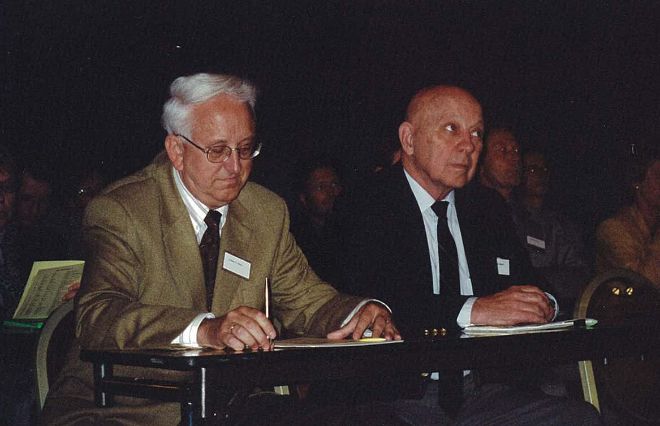 An extraordinary human being–scholar, teacher, author, friend, poet and family-man–has left us. James G. March died 27 September 2018, 90 years old, only a month after his teenage sweetheart and wife of 71 years, Jayne D. March passed away. Those of us, who came to know the two and their four children – Kathryn, Gary, Jim C. and Rod – are in deep sorrow.

It is impossible here to give an inventory of James March’s remarkable academic career: his great and lasting contribution to the emerging interdisciplinary field of organizational studies, his pursuit of an organization theory based upon behavioral realism and empirical evidence when it comes to how organizations shape the behavior of their members, how they make decisions, learn, and adapt to changing circumstances; or his academic appointments, writings, membership in academies, honorary doctorates, honors, and awards.

However, much of it is well known. Within a short time period, Jim contributed three “classics” that have inspired new generations ever since: James G. March and Herbert A. Simon: Organizations (1958), Richard M. Cyert and James G. March: A Behavioral Theory of the Firm (1963) and his edited volume Handbook of Organizations (1965). Among other things, we learnt about bounded rationality and the importance of organizational rules, routines and standard operating procedures; and how organizations live with unresolved conflicts, helped by local rationality, sequential attention, buffers of slack resources, conflict avoidance, and by treating competing demands as independent constraints rather than trying to establish a coherent preference function.

Among his other most cited publications are Exploration and exploitation in organizational learning (1991), highlighting the efficiency-adaptiveness dilemma, and a series of articles about organizational learning with different co-authors. Likewise, A garbage can model of organizational choice (1972, with Michael D. Cohen and Johan P. Olsen) and Rediscovering institutions (1989, with Johan P. Olsen). These are analyses of less than perfect processes of learning and adaptation, competitive selection and evolution, and “historical inefficiency”. Ideals of clear goals, consistency, coherence and control, are confronted with observations of multiple, conflicting and dynamic goals, norms and worldviews, and an uncontrollable world. In “organized anarchies”, orders are temporal rather than intentional. Yet, in highly institutionalized settings a logic of appropriateness, derived from an identity or role, replace a logic of consequentiality. There is a need to explain and justify behavior and what is called decision-making processes involve sense-making as well decision-making. Institutions have independent explanatory power. They are neither pawns of external forces nor obedient instruments of some master, or a result of pure chance.

Jim saw scholarship as an activity challenging widely held but possibly erroneous beliefs. He was fascinated by the emergence and the pursuit of novelty, sometimes produced by ignorance and error. He was an endlessly creative scholar who tried out his ideas in very different empirical settings, and he questioned the theory rather than behavior when the two did not coincide.

In his doctoral dissertation in political science at Yale University (1953), Jim was testing out ideas about the relation between group autonomy and internal group control, using data from 15 cultures in Oceania, Eurasia, Africa, North America and South America. Yet, whether he studied tribes, private enterprises, universities, or political and administrative institutions, Jim was always looking for general mechanisms and patterns. He did so with rigor, using mathematics, statistics, and computer simulations when possible in his model building. For some, Jim was a pioneer in management theory and the study of economic organizations and institutions. For others, focus has been on his contributions to political theory and the understanding political-administrative institutions and democratic government.  Jim’s influence cannot be contained to any discipline or school. He was drawing from, and contributing to, many fields, fascinated with political, social, legal and economic processes in organizational contexts.

Jim’s attitude towards teaching is probably less known than his scholarly achievement. Yet in the emeriti lecture, he emphasized that: “Teaching is a glorious calling”, “teaching is central to me”, and “fundamentally I think of myself as a teacher”. Already as a dean at University of California at Irvine, his goal was Making artists out of pedants (1967). Students should read less and develop the artistry of thinking analytically, learn the basic ability to abstract from reality to a model, and take small ideas and derive and test counterintuitive, surprising implications. The ideas were implemented in An Introduction to Models in the Social Sciences (1975, with Charlie Lave) and Mathematics for the Social and Behavioral Sciences (1969, with Bernard Gelbaum).

For Jim, scholarship and friendship came together. His publication list includes a large number of co-authors from many countries. Scholarship also came together with praise of beauty, truth and justice, and a genuine interest in fiction and poetry. His lessons in leadership often included insights from the canon of fiction, including the films he made on lessons in leadership from Cervantes’s Don Quixote (2003) and Tolstoy’s War and peace (2008). He is also author of several books of poetry. All are dedicated to his wife Jayne, an illustration of how much she meant for him during their long life together.

Jim often argued that one should not exaggerate the role of individuals in history. He was a believer in organizations and institutions more than heroic leaders. Nevertheless, as one who knew Jim for half a century, I have no doubt that he was a great leader, respected and loved by colleagues and friends around the world.