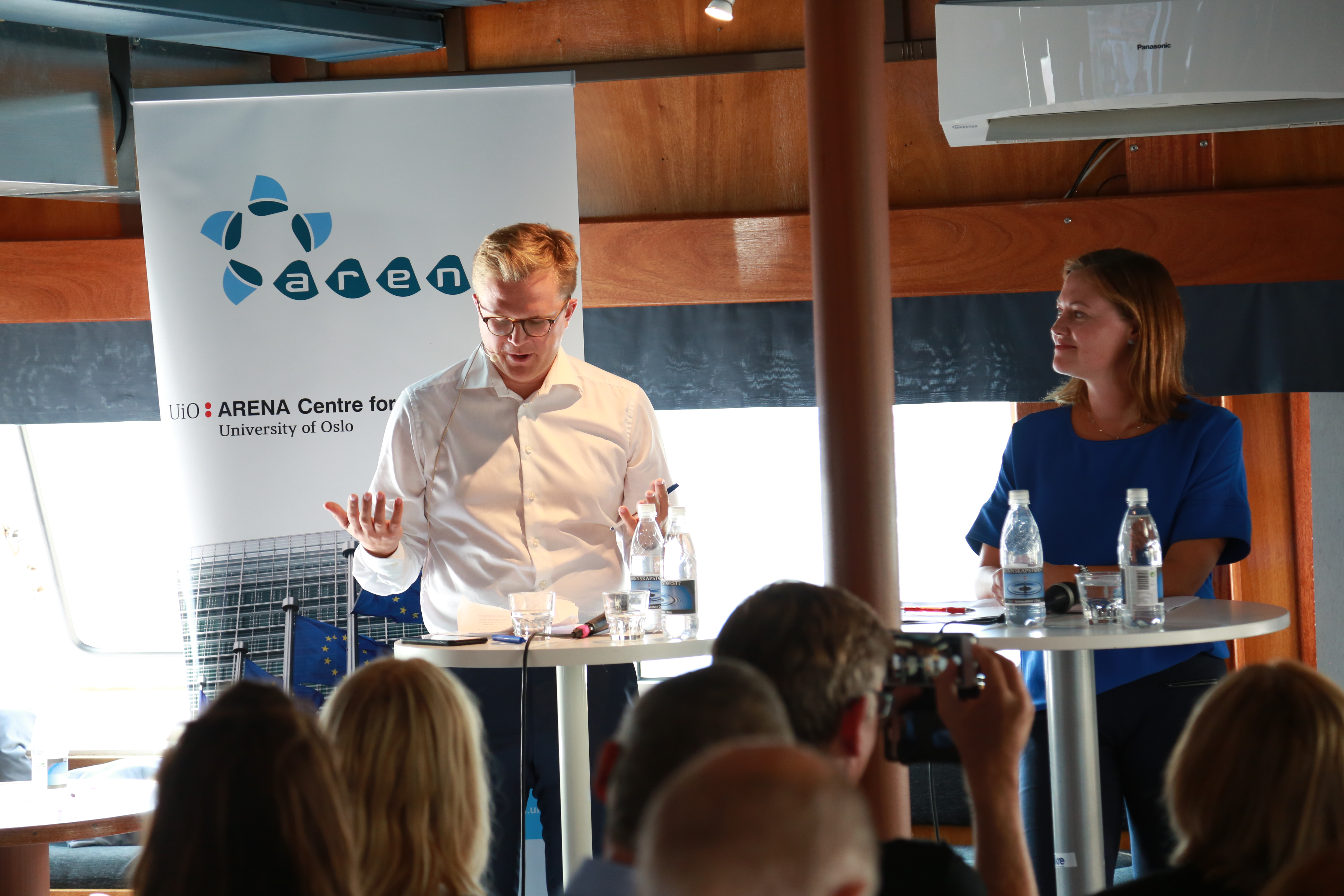 On 14-15 August, ARENA organized two events at Arendalsuka 2018 that attracted almost 200 attendees. Arendalsuka is the largest annual political gathering in Norway of decision-makers, academia, businesses, civil society and the media. ARENA participated in order to disseminate the centre's research and contribute to public debate on Brexit and EU agencies, two important and current political issues. 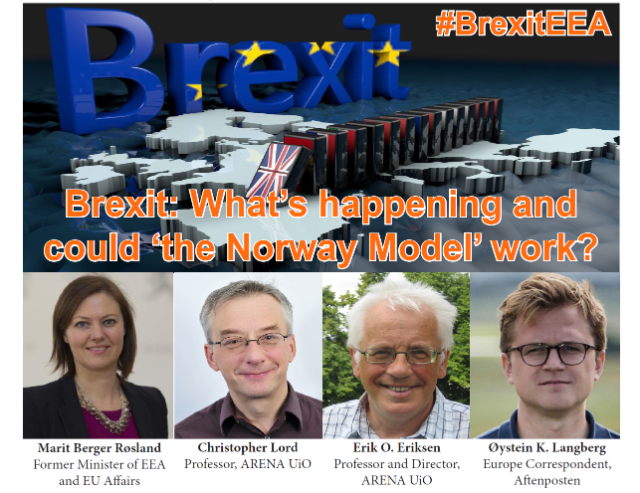 Is it in fact possible for a country to exit the EU without becoming a satellite of the Union?
- Chris Lord

The panelists discussed what the situation is six months before the UK officially exits the EU, the status of the negotiations and the possibility – and feasibility – of the ‘Norway Model’ as an option for the UK to ‘square the circle’ after Brexit.

Chris Lord started the debate by questioning whether it is in fact possible for a country to exit the EU without becoming a satellite of the Union.

Erik O. Eriksen pointed out the democratic deficit of the Norway Model, and proposed that the UK should have another referendum on Brexit. Any democracy should be able to change its mind, especially now that the Brits have been presented with the actual consequences of Brexit and alternative models for a UK relationship with the EU.

Marit Berger Røsland talked about the unpredictability of the Brexit negotiations and the significance of the fact that we still do not know what will happen when the UK leaves the EU. Røsland also pointed out the paradox of a ‘Norway model’ for the UK, where they would have to accept numerous of the policies that they supposedly voted against in the referendum. Røsland questioned whether the current state of affairs and ‘the Norway model’ is what the majority of voters desired when they voted for Brexit. 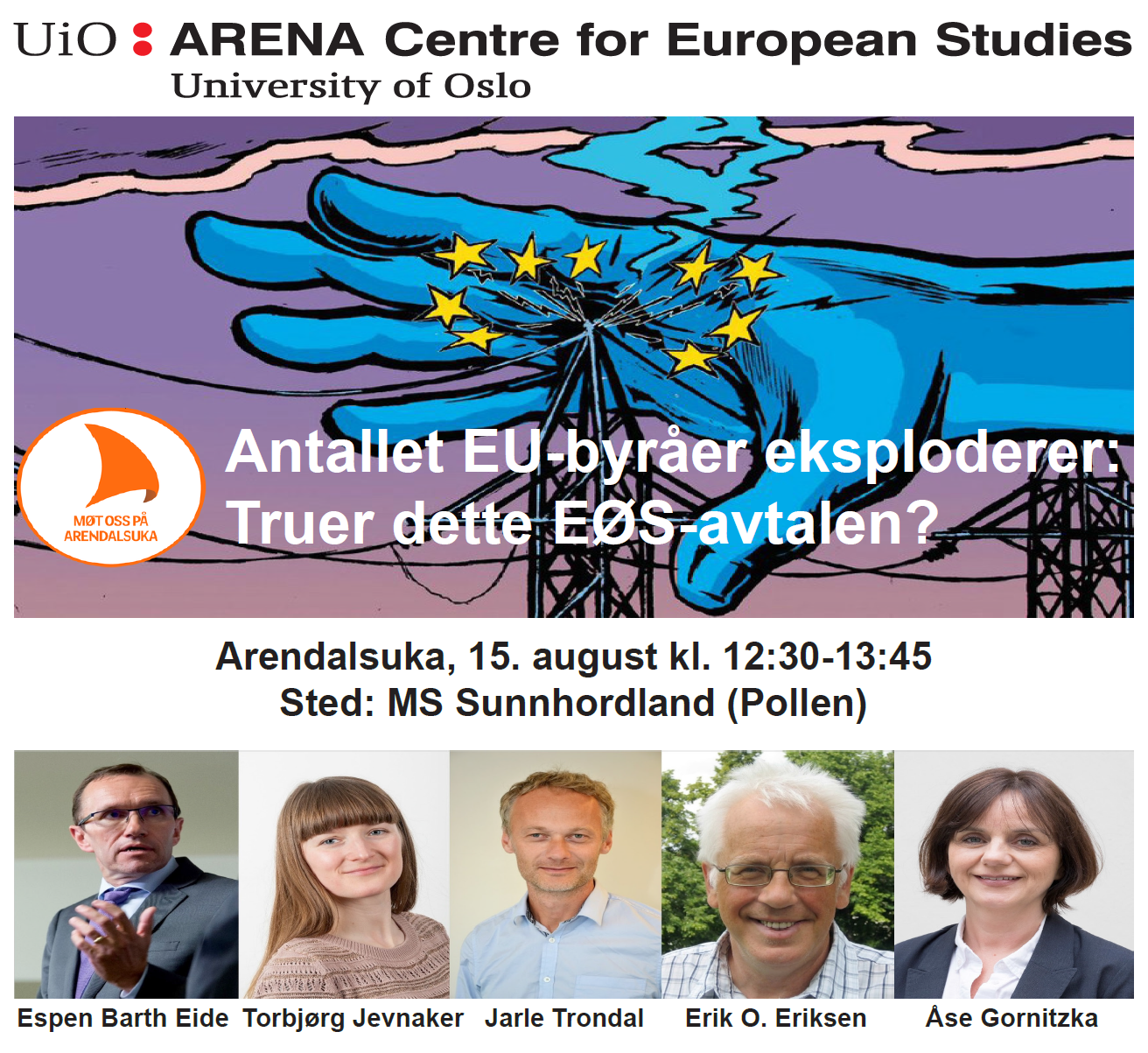 EU agencies – a threat to the EEA agreement?

This winter, the Norwegian affiliation to the EU’s energy agency ACER led to a contentious national debate. The EU has 40 such agencies, of which several can make decisions that directly affect Norwegian businesses and people. The panelists discussed what this means for Norwegian sovereignty and whether these agencies threaten the EEA agreement.

Jarle Trondal kicked off the event by providing an introduction to EU agencies and how the EU increasingly use such agencies to solve important new problems facing the Union, such as energy regulation across borders. Erik O. Eriksen discussed whether the increase in EU agencies leads to expert rule. He argued that EU agencies moves decision-making power even further away from Norway as an EEA country, because the agencies report back to the Commission and is thus controlled by an EU institution of which Norway is not a member.

There is a strong need to establish new routines, institutions and a culture for dealing with such important EU related issues at an earlier stage.
- Torbjørg Jevnaker

Torbjørg Jevnaker explained the Norwegian debate on ACER and why Norwegian membership of this agency is so contested. She described ACER’s actual tasks and powers and how the agency will be useful for regulating Europe’s more integrated energy market. Jevnaker pointed out that ACER was established almost eight years ago and Norwegian decision-makers started debating when it was too late to influence the political process. There is a strong need to establish new routines, institutions and a culture for dealing with such important EU related issues at an earlier stage.

Espen Barth Eide followed up by explaining what ACER means to Norway in a political sense and how the issue was debated in the Norwegian Parliament, particularly with regard to the contested process of joining the agency.

...there is a need for more knowledge and debate about Norway’s affiliation with the EU, both in the public and among decision-makers.

The event ended in a discussion about the level of public debate on the EEA agreement in Norway. The panelists agreed that there is a need for more knowledge and debate about Norway’s affiliation with the EU, both in the public and among decision-makers.

Moderator: Åse Gornitzka, Professor of Political Science and Vice Rector for research and internationalization at the University of Oslo.