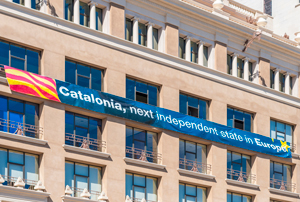 The Catalan independence referendum was held on 9 November 2014 (photo: colourbox.com)

In this comment (in Spanish), Agustín José Menéndez asks: Why do the people in Europe, and especially in South-Eastern Europe, increasingly feel that they have lost the ability to determine public policy? Why do more and more Europeans believe that governments and parliaments do not really rule, but rather international bureaucracies, such as the European Central Bank and the International Monetary Fund, or even diffuse powers, such as the financial markets and banking sector?

Is it a mere coincidence that the claims of independence from different regions (Catalonia, Padania, Scotland) are gaining strength right now? The answers to these questions go through the crisis and Europe. Or to be more precise, the relationship between the crises and Europe, Menéndez argues.

He further contends that because the crises are European, their solutions can only be found at the European level. But the question is not one of more or less Europe, but which Europe, and why.