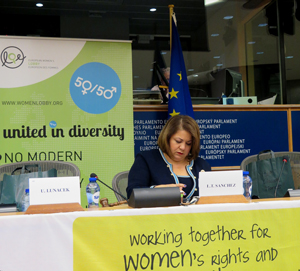 The European Women's Lobby has considerable impact in Brussels (Photo: EWL via Flickr)

– What we call ‘representative expertise’ is likely to be an important reason why the EWL’s views are heard. The organization claims to know what the full breadth of European women want and need, but the analyses and policy suggestions it provides are quite unambiguous. From a democratic perspective, this is not unproblematic, Cathrine Holst explains. She is senior researcher at ARENA Centre for European Studies and affiliated with the Centre for Research on Gender Equality (CORE).

Along with ARENA colleague Helena Seibicke, Holst has analysed the lobby organization’s reports, press releases, statements and notes. They presented their findings at this summer's world congress of political science in Canada, and are currently revising the analysis for publication as a scientific article.

The researchers find that the EWL’s expertise can be broken into four different categories.

– In addition, the organization points to effective policies of individual countries, which in its view provide good examples. A rigorous research-based justification for such suggestions is not really involved. It is more about assembling readily available information in an efficient manner, Holst explains.

Second, the organization’s Brussels expertise is noteworthy. This consists in commanding the EU system, talking the ‘EU language’ and knowing where to address their concerns – and how – in order to gain influence at the different stages of a policy-making process.

The third type of expertise is the already mentioned ‘representative expertise’, which is an acquired competence in speaking ‘good’ on behalf of European women. 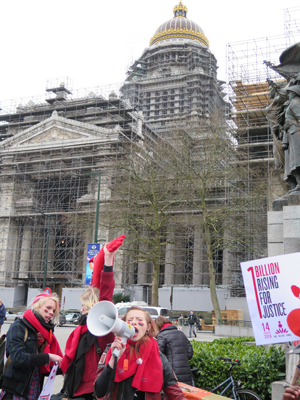 The EWL in front of the Palais the Justice in Brussels in a campaign to support women victims of violence (Photo: EWL via Flickr)

Finally, the researchers argue that the EWL offers a kind of ‘moral expertise’, a developed ability to deliver viable arguments for why women’s rights and gender equality policies are important. Here the organization, in a pragmatic manner, alternates between radical feminist rhetoric, more ‘neutral’ arguments that emphasize equal treatment and equal opportunities, and a socio-economic cost-benefit perspective.

– The argument that ‘gender equality pays off’ seems to become increasingly important. As an example, the EWL claims that good gender equality policies will help the EU out of the economic crisis, Holst explains.

– And when good gender equality policies gain acceptance, this benefits all female citizens. But at the same time, centralization comes with obvious costs in terms of democratic participation and diversity, Holst says.

This article was first published by CORE on 29 August 2014 (in Norwegian).

The Centre for Research on Gender Equality (CORE) conducts research on gender equality, with particular emphasis on working life. CORE is part of the Institute for Social Research in Oslo.

Cathrine Holst is senior researcher at ARENA and affiliated to CORE.

Helena Seibicke is PhD candidate at ARENA. Her project deals with how the EWL tries to influence EU decision-making.

Their joint paper 'Experts on gender: On the role of expertise in EU gender politics' was presented at the IPSA conference in Montréal, 19-24 July 2014.