Markus Patberg presents the paper 'Constituent Power in the European Union: A Critique of Regional Cosmopolitanism' on 14 May 2019 at ARENA. 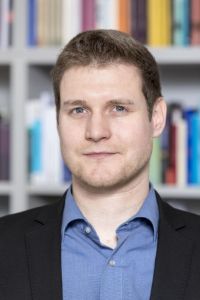 In the course of the recent crises of European integration, the politicization of the EU has increased. Not only do Eurosceptic forces seek to ‘take back control’, as in the case of Brexit or opposition to austerity, but also pro-European citizens claim to have been illegitimately excluded from decisions about the EU. Protest movements challenge the role of the states as the ‘masters of the treaties’. Drawing on vocabulary of popular sovereignty and self-government, they suggest that ‘the people’ should decide on the EU’s structure and competences. In this paper, I examine whether the public narrative of ‘We, the people of Europe’, which purports that the EU should be shaped through decisions of a political community that transcends the borders of the member states, articulates a notion of constituent power that can be defended in systematic terms. To that end, I draw on the political theory of regional cosmopolitanism, according to which the EU derives its democratic legitimacy directly from free and equal persons who appear on the scene as European citizens rather than members of their nation-states. I argue that a regional-cosmopolitan model of constituent power can build on the plausible claim that since the EU has created a cross-border collective of addressees and authors of the law, it should enable the members of this group to engage in democratic opinion- and will-formation regarding their common institutions. However, the idea of a constituent power composed of EU citizens runs into problems because it fails to accommodate the fact that the member states do not disappear from the scene and have their own domestic constituent powers. Ultimately, regional-cosmopolitan constituent power cannot be reconciled with the nature of the EU as a compound and dependent polity.

Dr. Markus Patberg is a research fellow at the Department of Social Sciences at the University of Hamburg