In this Tuesday Seminar, Charlotte Galpin and Hans-Jörg Trenz presented a paper 'A ‘Spiral of Euroscepticism’? European Parliament Elections, Public Contestation and Media Negativity in Germany and the UK'. 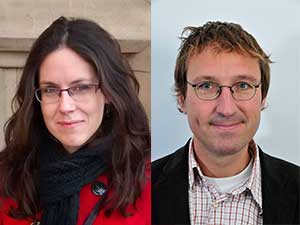 The 2014 European Parliament (EP) elections have been widely discussed as a defining moment for the EU, as significant numbers of Eurosceptic MEPs won seats. In the UK, UKIP came ‘first’ ahead of the Conservatives and Labour. In Germany, the newly formed AfD won seven per cent of the vote – significant in a country with a long-standing pro-European consensus. The 2014 election was also unique to the extent that EP parties selected a lead candidate for the President of the Commission – the Spitzenkandidaten. It has long been argued that increased politicisation of the EU through debates about European politics and contestation over political leadership would increase the legitimacy of EU. We argue, however, that this politicisation is differentiated and that support for Eurosceptic parties is in part driven by the media through politicised Eurosceptic election campaigns. Through a comparison of two online quality and one online tabloid news site each in both Germany and the UK, we place the success of Eurosceptic parties in the context of a persistent negative bias of EU news coverage. We investigate the extent to which there are two interrelated biases in the selection and framing of EP election news: a bias towards negativity and a bias towards polity contestation over policy or political contestation. We argue that a ‘second-order Euroscepticism campaign’ in the British news contributed to support for UKIP and, later, support for Brexit.

Please note that this paper is work in progress and thus has limited distribution, please contact us if you would like access. Do not cite without permission from the authors.

Charlotte Galpin is a postdoctoral researcher at the Department of Media, Cognition and Communication at the University of Copenhagen. Galpin studies Euroscepticism and the European public sphere, with a particular focus on Germany, the UK and Poland and the relationship between EU politics and the media.

Hans-Jörg Trenz is a research professor at ARENA. He is also EURECO Professor at the Centre for Modern European Studies (CEMES) at the University of Copenhagen.