On 27 January 2014, Baldur Thórhallsson from the University of Iceland gave the presentation 'Are Icelanders not good Europeans? The reluctance of the Icelandic political elite to take full part in the European project'. 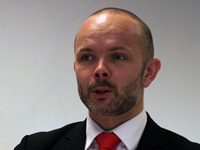 Baldur Thórhallsson presented a paper on Iceland’s contested European policy. He argued that there is a uniqueness to the states found in the North-Western European corner, namely, Iceland, Norway and the Faroe Islands, which consists in a lack of belonging to the European project. In order to understand why this is so, we need to look beyond the conventional explanations of fish and identity, he argued. After shortly presenting an historical overview of Iceland's participation in EU integration he explained that there is a discrepancy between the political elites’ and the Icelandic voters’ position on EU integration. Iceland might be the only state where the political elite remains largely eurosceptical while the population over time has proved to be pro-European. He offered five explanations to understand the particularity of Iceland's European policy.

First, he highlighted how the political discourse and the historical narrative in Iceland revolved around its independence and sovereignty. Second, he argued that being surrounded by waters and being geographically isolated has created an image that Icelanders must manage on their own. Third, he pointed to economic advantages of participating in the EU internal market through the EEA agreement and held that the EU is only conceived in economical terms. Fourth, he explained how Iceland hold close ties with the United States and that Iceland has chosen to focus on bilateral agreements rather than having a multilateral approach to international relations. Ultimately, he argued that Iceland's small public administration has hindered it from engaging in long-term policy-making concerning European and security affairs.

Thórhallsson's presentation was followed by a discussion on issues such as contradictions in his paper, his methodological choices in choosing explanatory factors and the lack of addressing developments within the EU and how this may affect Iceland's position on EU integration.

Iceland’s contested European Policy: The Footprint of the Past - A Small and Insular Society, Jean Monnet Occasional Paper 02/2013

Baldur Thórhallsson is Professor of Political Science and Jean Monnet Chair in European Studies at the University of Iceland. He is also Programme and Research Director at the University's Centre for Small State Studies. His research focus is primarily on small state studies, European integration and Iceland’s domestic and foreign policy.