On 23 September 2014, Professor David Mayes from the University of Auckland and visiting researcher at ARENA presented the paper 'Banking Union in Europe. Will it work? What will it cost?'. 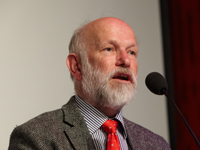 David Mayes' paper focuses on the so-called Bank Recovery and Resolution Directive (BRRD) and explores the problems of assessing the costs of resolving failing banks. The paper extensively discusses the costs that are attached to failure resolution and to which extend those costs can be minimized. It does so by explaining the New Zealand scheme and the assessment of the impact these resolution and recovery mechanisms will have on the economy. Mayes hereby addresses the fact that most of the banks in New Zealand are Australian owned and that the way the Australian government chooses to deal with its bank when insolvent will impact also New Zealand. The paper then explores the BRRD/SRR and discusses the ways in which these might be implemented to keep the risks of the society at a minimum. The certainty that bailing in will be applied will aid in the preferences for this mechanism rather than bailing out. Furthermore, since the costs of a bail in are higher for banks, it is likely that banks will be more careful. However, the point of the BRRD is in the first place, when dealing with an insolvent bank, to minimize the impact on the economy and on the living conditions of ordinary people. Bailing in then will only address the depositors and make them shareholders. Mayes concludes that bailing in is fairer than bailing out, but costs for society at large are not necessarily lower.

The second development addressed in the paper is how the bailing in of a cross border bank should be financed and what sources should be addressed. Mayes’ presentation highlighted that for the EU banks which are located in several Member States or Member States and non-Member States will be dependent on the choices made in the host country under the BRRD. For Norway this would for example mean that the way the Swedish government choses to deal with bank insolvency (the choice to bail out or to bail in) has also consequences for the Norwegian taxpayer.

Furthermore, the choices made by national governments are based on a lot of uncertainty in the time of crises, where many factors need to be taken into account but not all consequences can be overseen. The most important factor in the time of crisis is that there is a need for a quick response to the negative conjunctures.

The discussion of the paper focused on questions with regards to the predictability of bank insolvency, what kind of rationale underlies the choices made, the control of the ECB in comparison with national authorities and the consequences of the BRRD for Norway.

As of August 2014, Prof. Mayes is visiting researcher at ARENA as part of the co-operational work within ARENA's research project EuroDiv.