At the ARENA Tuesday Seminar on 16 September, Professor Dorte Sindbjerg Martinsen from the University of Copenhagen presented the paper 'Judicial influence on policy outputs? The political constraints of legal integration in the European Union'. 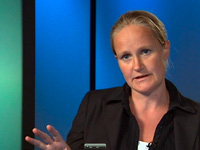 Dorte Sindbjerg Martinsen’s paper investigates to what extent and under which political conditions decisions made by the Court of Justice of the European Court (CJEU) influences EU social policy. Influence, it is argued, is a key ingredient to understanding decision-making process. One the basis of which the paper develops a taxonomy of judicial influence alongside institutional procedures and rules, incorporating expectations of how political positions and interactions are thought to affect the Courts influence. The dataset Martinsen analyses has two facets; it consists of judicial decisions made over time from 1958 to 2014, as well as case studies of EU working time regulation and patient rights.

By means of this analysis, the paper confirms traditional expectations that argue that judicial influence depends upon the clarity of the court rulings, the strategic behaviour of the Commission and the timing of the ruling. However, the paper adds another three elements to the discussion, adding the following to the taxonomy of the Courts influence: (1) the institutional and socio-economic implications of the ruling; (2) the institutional framework of the policy, and; (3) the extent to which positions aligns and changes. This is grounded in the observations that political institutions and actors interpret and use case-law differently and therefore what constitutes legal certainty is unclear and plural. Moreover, intra- and inter-institutional disagreement concerning how to respond to case-law frames the political ability to respond to judicial decisions and as such condition the Courts influence. Finally, the Commission conditions judicial influence not only on the basis of its ability to act strategically, but importantly also on the basis of its ability to act selectively. Thus, the paper asserts that modification and non-adaption are part of the Courts toolkit of influence. This leaves us with the following conclusion: judicial influence varies and the expectation of political responses conditions judicial influence.

The discussion that followed the presentation was focused mainly on questions of clarification concerning the papers analytical framework, the definition of influence and the framing of the evidence.

Dorte Sindbjerg Martinsen is Professor at the Department of Political Science at the University of Copenhagen.