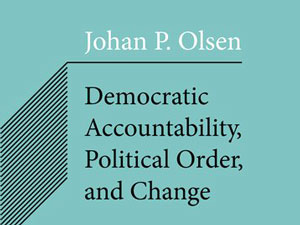 In his latest book Democratic Accountability, Political Order, and Change Johan P. Olsen explores accountability processes in the context of European transformation. He  examines democratic accountability as a mechanism by which citizens are supposed to influence and control their elected representatives, non-elected officials, and other power holders.

The aim of this book is twofold: to contribute to the theorization of democratic accountability and to discuss what accountability processes tell us about political order and orderly change in general.

Ongoing transformations of the political organization of Europe, where both the nation-state and the European Union are challenged, make it possible to explore phenomena that are difficult to see in stable periods. An upsurge in accountability-demands, where political leaders are required to explain and justify what they are doing, is one such phenomenon.