Debate: EU and the constitutions

This debate will gather parliamentarians from Norway, Denmark and Sweden to discuss today’s constitutional context and challenges. Do we take the current situation seriously enough? 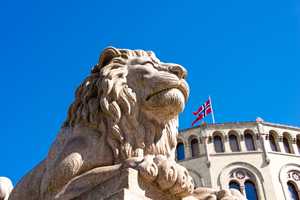 As part of the international conference Democratic Constitutionalism in Europe, ARENA invites to a parliamentary debate on Nordic constitutional democracy in a Europeanised context. Do we realize the severity of the current constitutional context and challenges?

ARENA has invited a panel of Scandinavian parliamentarians to discuss today's Europe and the countries' EU affiliations.

The event will be in Norwegian/Scandinavian languages.

The Norwegian Constitution was adopted on 17 May 1814 and is the second oldest written constitution in the world still in existence. Its bicentenary has been celebrated throughout 2014 to raise awareness of what the constitution means today and what role it will play in our future democracy.

Norway's November constitution was signed on 4 November 1814 to allow for Norway's accession to Union with Sweden. The Swedish king even wanted to turn this date into the Norwegian national day and aspired to a homogeneous union. Even in this light it is obvious that the current intertwining of European and national law is unprecedented. International relations and framework conditions have a much greater impact on the Nordic countries' internal affairs today than 200 years ago. The countries are also more integrated than they were at the time.

The European integration process affects most aspects of Norwegian society and way of rule, even as a non-EU member state. How do Norwegian law makers relate to this complex reality? What role and function can national constitutions have today, with the EU and its body of law at the supranational level? What about our neighbours and EU members, Sweden and Denmark?

By holding this event on 4 November, we want to highlight how important the relationships with the external world are in the shaping of all states as democratic states.

The event is free and open for everyone. It will be held in Norwegian/Scandinavian languages.