Research seminar: The meaning of partisanship

ARENA and the Democracy Programme organise a research seminar on political parties and the place of partisanship in current democracies. 27 October is devoted to discussions on a forthcoming book which aims to rejuvenate the theoretical study of partisanship. 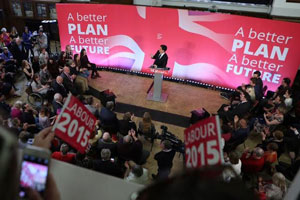 The British Labour Party experienced a massive expansion this summer in connection with the leadership campaign (photo: Labour Party via Flickr)

The University of Oslo's Democracy Programme and ARENA organise a research seminar to discuss the book manuscript The Meaning of Partisanship with the authors, Jonathan White and Lea Ypi (LSE).

From the draft introduction to the book:

'Political parties have taken a battering in recent years. In democracies across the world, organisations that endured for much of the twentieth century find themselves withering on the electoral vine, deserted by voters and members alike. For many a party leadership, this is a time of public rejection. But what of the underlying idea they are born of? To what extent are the trials of parties in their specificity indicative of the declining resonance of partisanship itself, of the more general political outlook in which it makes sense to associate with a party? Exactly how deep does the rot go?

Here the trends of the age are ambiguous. On the one hand there is evidence to suggest the difficulties facing contemporary parties are rooted in more profound processes of depoliticisation that make practices of collective action less socially appealing. Coupled with an analysis of the socio-economic and political constraints on what parties in government can achieve, one may easily arrive at a diagnosis of long-term disenchantment with the party as a political form. On this view, parties are a remnant of a different epoch, the residue of the past in the present.

At the same time one sees signs of renewed partisan engagement, often inspired by frustration with alternative modes of political agency. Whether in Latin America in the 2000s or Mediterranean Europe in the 2010s, new parties have developed out of social movements and movement coalitions to achieve significant electoral success. The accounts of activists themselves suggest there are certain features of the party form, notably its intended continuity and comprehensiveness of vision, which are prized at least as much as the alternative qualities of spontaneous action. The implication is that where alternatives have been tried they too have been found wanting, prompting their protagonists to return to the partisan model. Nor is this interest restricted to new parties: the massive expansion of the British Labour Party in summer 2015 in connection with the leadership campaign of Jeremy Corbyn shows how even long-established parties, at least in some circumstances, retain the capacity to inspire mass publics.'

The book consists in three parts. The subject of the first part is the relation between the partisan and the political community at large, explored across a series of chapters that analyse the challenging but potentially crucial contribution of partisanship, properly conceived, to political life. The relation between the partisan and their party is the topic of the book’s middle section, investigated in terms of the value of commitment and the ethical and organisational ties that underwrite it. The third theme concerns the complex relationship between partisans and political institutions, as revealed in both ordinary and extraordinary circumstances.

The work moreover builds on the article 'On partisan political justification', published by White and Ypi in the American Political Science Review

Jonathan White is Associate Professor (Reader) of European Politics at the European Institute, London School of Economics. He has been research fellow at the Humboldt University in Berlin and holds a PhD from the European University Institute (EUI) in Florence. His research interests lie in the fields of political sociology and applied political theory, with a particular focus on contemporary European democracy and EU integration.

Lea Ypi is Associate Professor in Political Theory in the Government Department, London School of Economics, and Adjunct Associate Professor in Philosophy at the Research School of Social Sciences, Australian National University. She has been researcher at Nuffield College (Oxford) and the European University Institute in Florence, where she obtained her PhD. Her research interests include normative political theory (democratic theory, theories of justice, and issues of migration and territorial rights) and Enlightenment political thought, especially Kant.

The seminar is open for everyone, but please send an e-mail to Prof. John Erik Fossum to sign up.