Former President of the European Parliament Jerzy Buzek will hold a public lecture on the Ukraine crisis and the implications for the EU, Eastern Europe and the relationship with Russia on June 2nd.

We regret to announce that the lecture has been cancelled.

May marks the 10th anniversary of the biggest enlargement in the EU's history including 10 new member states, mostly from Central and Eastern Europe. This "unification" of Europe has been depicted as a great success in terms of democracy and stability.

However, recent events in Ukraine have shown that parts of Europe still struggle for democracy. Tensions between the East and the West have been revived, with the EU supporting Ukraine's transition and promoting democratic reforms and Crimea becoming part of Russia. Has Ukraine turned into an EU-Russia battleground? What dilemmas are the EU facing today? How does the Ukraine crisis affect the EU's relationship with Russia?

Former President of the European Parliament Jerzy Buzek will hold the open lecture:

Crisis in Ukraine: What implications for the European Union, for Eastern Europe and for the relationship with Russia?

Jerzy Buzek is Member of the European Parliament (EP) (Group of the European People's Party). He is former President of the EP and former Prime Minister of Poland. Buzek can thus provide unique insights into what the current crisis in Ukraine means for Eastern Europe, what kind of dilemmas the European Union is currently facing, and how the crisis affects the EU's relationship with Russia.

At the end of the lecture, the floor will be opened for questions from the audience.

The lecture is free and open to everyone, no registration required.

Please note that the entrance will close at 10:00.

ARENA Centre for European Studies and the Faculty of Social Sciences, University of Oslo 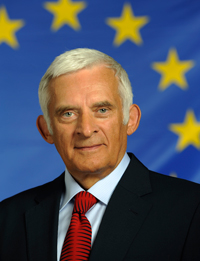 Buzek was President of the European Parliament in 2009-2012 and was the first person from the former Eastern block to serve as EP President.