Law and democracy in Europe

This workshop takes stock of the present status of legal-democratic rule in the EU. What are the implications for democratic arrangements of increased executive dominance and technocracy, as well as more differentiation? Are there any prospects for representative-democratic institutions to ‘fight back’? 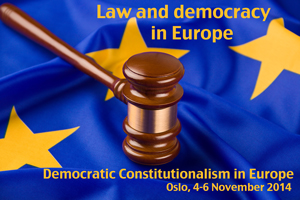 This workshop focuses on law and democracy and takes stock of the present status of democratic constitutionalism in an EU that is not only still in the throes of crisis with heightened executive dominance and technocracy but that has also become more differentiated.

'Law and democracy in Europe' will start by examining the nature of the crisis and the implications it has for the EU as a political-legal system, and for the EU's relations to its citizens. Particular emphasis will be placed on challenges associated with executive dominance, technocracy and differentiation. With regard to the latter it is useful to examine whether the crisis context is shifting from differentiated integration to differentiation. The latter encompasses differentiated integration but also might include two new differences, namely that some states integrate more closely whilst, at the same time and for connected reasons, others disintegrate from their previous levels of involvement with the Union; and that even notionally full members may come to be regarded as having different membership status.

These developments in turn raise interesting questions for closely associated non-members such as Norway. What are the implications of these developments for democratic arrangements? Are there any prospects for representative-democratic institutions to 'fight back' and restore/improve democracy? What are the implications of differentiation for the theory and the practice of democracy? The question is whether citizens are capable of governing themselves in a multilevel political entity marked by patterns of authority and/or policy-making that vary in unprecedented ways along territorial and functional lines.

Panel 1: The crisis: implications for law and solidarity

The Eurozone crisis in light of the EU's normativity
Erik O. Eriksen, ARENA, University of Oslo

Panel 2: The challenges of technocracy and executive dominance

The euro crisis and the executive dominance of EMU: The implications of an intergovernmental union
Sergio Fabbrini, LUISS University, Rome

Panel 3: How to think of representation in an increasingly differentiated Europe?