This workshop focuses on Europe's civil society and on the implications of the crisis. A key assumption is that the crisis politicizes through redistributive conflicts and a ‘new politics of identity’. An important question that is considered is how the Europe of rights and citizenship confronts a Europe of increasing inequalities. 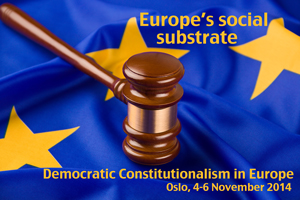 Crisis-induced social constraints and conflicts test the capacity of the political system (both nation state and EU) to respond to the needs and demands of society. This workshop is concerned with the contestation of legitimacy across societies and political systems. From a comparative and cross-disciplinary perspective we will explore how the ‘European crisis’ has generated deep and ongoing conflicts about European integration within and across national domestic politics, how it has fuelled debate over the authority of the constitutional state and of transnational regimes of governance, how it has pit northern countries against southern ones, citizens against elites and ultimately how it has also fundamentally put into question the efficiency and morality of the European free market and its capacity to guarantee welfare, sustainable growth, and equal distribution of goods and benefits.

The different contributions will explore these contestations within and across national arenas. They will look into the carriers of these contestations: public intellectuals, political parties and a growing number of protest movements and their various allegiances and frictions. They will further investigate how political conflicts are channelled through different media outlets, amplifying and interconnecting perceptions of interests, identity and solidarity.

TINA revisited: Alternative narratives of the Euro-crisis and how they matter
Ulrike Liebert, University of Bremen

Unemployed youth and politics in Germany and Sweden: A qualitative approach to a contested relationships
Christian Lahusen, University of Siegen (with Jennifer Hobbins, University of Karlstad)

On behalf ourselves: The paradoxes of non-conventional representation and the Eurozone turmoil
Giovanni Moro, FONDACA, Rome

Panel 2: Popular resistances and protest in times of crisis

National stereotypes in the context of the European crisis - an overview of current research
Aline Sierp, University of Maastricht (with Christian Karner, University of Nottingham)

Panel 3: Euroscepticism in times of crisis

The rise of rightwing euroscepticism in crisis-stricken Greece
Susannah Verney, University of Athens