Crisis, innovation/experimentation and the governance of European integration

As part of the 5th International Conference on Democracy as Idea and Practice, John Erik Fossum will organise a workshop with Andreas Føllesdal on crisis, innovation/experimentation and the governance of European integration. 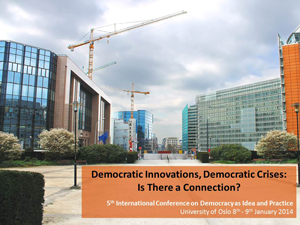 The theme of the 5th annual conference of the Democracy Programme at the University of Oslo is 'Democratic Innovations, Democratic Crises: Is There a Connection?'

Europe is currently undergoing the worst crisis in the EU’s history. Crises may cause breakdowns; they may also generate innovation and spur experimentation. The EU is then also frequently considered a major experiment in the world of political governance, not the least because it is the world’s first major attempt at establishing democracy at the supranational level. What has the crisis done to the democratic character of the multilevel constellation that makes up the European Union? One important player has noted that “the democratic credibility of European integration has suffered enormously from the manner in which the euro crisis has been dealt with to date…”(European Parliament 2011). This workshop will discuss the democratic implications of the crisis.

The workshop will also focus on innovative aspects of the process of integration, not the least because democratization must accompany polity formation. It is not a matter of democratizing an already established and existing system, but of establishing and democratizing a supranational system at the same time. The long-held assumption is that the two processes proceed in parallel. The question is whether that continues to apply in the context of crisis. The workshop will discuss whether the innovative features of the integration process offer distinct democratic prospects.

Democratic Innovations, Democratic Crises: Is There a Connection?

5th International Conference on Democracy as Idea and Practice, University of Oslo