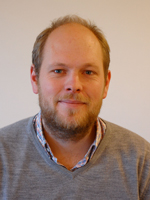 Academic interests: Espen D.H. Olsen is a political scientist who does research on European citizenship, EU integration, citizen deliberation, deliberative democracy, and the role of citizenship in the Eurocrisis. He also pursues more general interests in political theory focusing on citizenship and identity, as well as qualitative methods and process tracing.

October 2019: Article published in International Spectator. The article is on newspaper narratives in Norway on migration, linking to the recent refugee crisis. It was co-written with Ragnhild Grønning (Arena) and is titled "From Humanitarian Needs to Border Control: Norwegian Media Narratives on Migration and Conceptions of Justice".

August 2019: New book published! The title is Challening European Citizenship. Ideas and Realities in Contrast and is published by Palgrave Pivot. The book was co-written with EU law expert Agustín José Menéndez from the University of Madrid. It is a criticque to both theoretical and normative perspectives on EU citizenship, but also gives some modest proposals on how to regenerate citizenship and democracy in the EU.

January, 2019: Book chapter on "Welfare State Discourse and Citizenship Politics: From 'Silent Policy to Steering Logic", focusing on the Norwegian case in a Europeanized and globalized perspective is now out. It is published in Democratic State and Democratic Society: Institutional Change in the Nordic Model, edited by Engelstad, Holst and Aakvaag. The publisher is De Gruyter and in keeping with the times, it is Open Access here.

December, 2018: Two projects where I will be a member of the research group has won funding. The first is EU3D (coordinated by ARENA), a project on differentiated integration in the EU, funded by Horizon 2020. The second is PLURISPACE - Public Spaces: Culture and Integration in Europe (coordinated at Sciences Po), a project on migrant integration and normative models of diversity management in several European countries, funded by HERA.

May, 2018: Another book! Contract signed with Palgrave Macmillan on a monograph titled Post-Citizenship, the EU and a Europe of Crises. This is a single authored book which aims to analyze the state of European citizenship after the decade of recurring European crises. Preliminary publication date is winter 2020, in the Politics and Migration Series.

March, 2018:  Contract signed with Palgrave Macmillan on a monograph titled A Democratic Critique of European Citizenship, co-authored with my colleague Agustín José Menéndez. Preliminary publication date is spring 2019, in the Palgrave Pivot Series.

January, 2018: Book chapter on "The role of expertise in the European refugee crisis" published in the edited volume Expertisation and Democracy in Europe (edtiros Gora, Holst and Warat, Routledge, 2018).

February, 2017: Textbook on the EU published, co-written with Guri Rosén and Jarle Trondal: Hvordan virker EU? Institusjoner og politiske prosesser (Oslo, Universitetsforlaget). The book is written for undergraduates and others with an interest and need for an introductory text on the EU and its workings. More information here.

As part of Arena's main research focus in the period 2014-2019, my project aims to further illuminate our understanding of EU citizenship and the role it plays in European integration. The Project is situated in the work package on "Law and Democracy" which focuses on the crisis, segmentation, and democratic and constitutional implications. The assumption is that greater segmentation is associated with weakened democracy and de-constitutionalisation, whereas democratic constitutionalism is a countervailing force. My research in this Project is still under Development, but three main avenues will be pursued. The first is to analyze the politics of EU citizenship in a Europe of multiple crises, including the migration crisis that erupted in the summer of 2015, with an emphasis on Institutional and systemic developments. The second is a critical review on and rejoinder to the debate on the virtues of EU citizenship for the citizens as "foot-soldiers" of European integration. This study will emphasize the disjunctures between the "lightness" of EU citizenship for prosperous and cosmopolitan Professionals in the neo-liberal economy and the rising precariat of withering European welfare states. The third brings in the question of the justifiability of EU citizenship and rights 'beyond the nation-state' in a multilevel EU where the deliberative sites for accountability and public scrutiny of citizenship politics seem to be hidden from the publics of the member states.

The European Crisis and the Citizens (2013)

This project revolves around the concept of EU citizenship as a resource for social and political resilience for EU citizens that are faced with particular challenges during periods of economic and political crisis. EU citizenship has thus far been mostly applicable to mobile elites and the realization of their cosmopolitan life projects. We test the proposition that in the current conditions of socio-economic transformation and uncertainty, EU citizenship and the rights stemming from it becomes a potential resource of resilience for vulnerable citizens in their various attempts to cope with the negative consequences of crisis. The project will be published in two main publications. The first is a book chapter called "Eurocrisis and EU Citizenship". It is a case study of EU migrants from crisis-ridden countries in Europe that have come to Norway to seek employment. Specifically, the book chapter explores how migrants perceive their own situation in terms of their rights and duties as EU citizens in Norway. The second is a book manuscript (currently under planning) on how the Eurocrisis has affected EU citizenship politics and citizenship enactment among ordinary citizens. The book will chart these developments through case studies of EU citizens on the move in a Europe of crises (micro-level) and its handling by the European Commission as a leading EU institution (meso-level), as well as of macroscopic changes to the place of citizenship in the EU integration architecture (macro-level). This project was conducted in collaboration with Hans-Jörg Trenz and Asimina Michailidou.

The Norwegian Constitution in a Changing European Context (NORCONE): The Citizenship Dimension (2012-2014)

Citizen Deliberation in a Multilingual and Transnational Setting: The Europolis Deliberative Poll (2008-2011)

In this project, a deliberative polling experiment was carried out to test whether deliberative democracy can contribute to address the democratic deficit in Europe, with particular reference to the 2009 European parliamentary elections.

On May 29-31 2009 EuroPolis brought 400 European citizens from the 27 member states to Brussels to debate immigration, climate change, and the EU policy- making process- a unique experiment in informed decision-making. Participants spent three days discussing these issues in small working groups, and then in plenary sessions with a battery of experts and election candidates.

Citizenship Politics and Polity Models for the European Union (2009-2011)

In this project under RECON, the aim is to assess the three polity models of the RECON project from the vantage point of European citizenship discourse. The concept of citizenship is especially suited for the appraisal of such models, as it connects to issues such as the boundaries of a political community, norms of membership, the role of identity, the extension of individual rights, and modes of democratic participation. These are all issues that speak to the political form of the EU. Focusing on citizenship when addressing the political form of the EU is not the least apposite as the traditional understanding of membership in a bounded community has been that citizenship is conceptually and logically linked to the nation-state. Hence, the very idea of European citizenship challenges the paradigmatic understanding of citizenship as congruence between nation, state and citizenship.

The project will start out with an assessment of the development of multilevel citizenship structures in the EU after the Maastricht Treaty up to and including the constitutional debates of the Charter of Fundamental Rights and the Convention on the Future of Europe. In doing so, it will probe the institutional form and individual scope of citizenship rights at the intersection between EU institutions and Member States, as European citizenship is bicephalous; it consists both of direct supranational rights and a set of rights that follow from the principle of free movement.

Transnational Citizenship in the European Union (2004-2008)

Is European citizenship the postnational 'beacon' that academics and politicians professed after the Maastricht Treaty? This ph.d. project at the European University Institute (EUI) argued that it is not. Through careful process tracing of decisive moments and critical junctures of citizenship politics in the project of European unification from the founding treaties to the 21st century constitutional politics, the project concluded that it is rather a strong transnational construct. This transnational citizenship is built on two basic principles that have been present since the first treaties: nationality and free movement. The project was published as a book from Bloomsbury Academic in 2012 (with paperback version in 2014).The book is entitled Transnational Citizenship in the European Union. Past, Present, and Future. More details are found here on the Bloomsbury website.