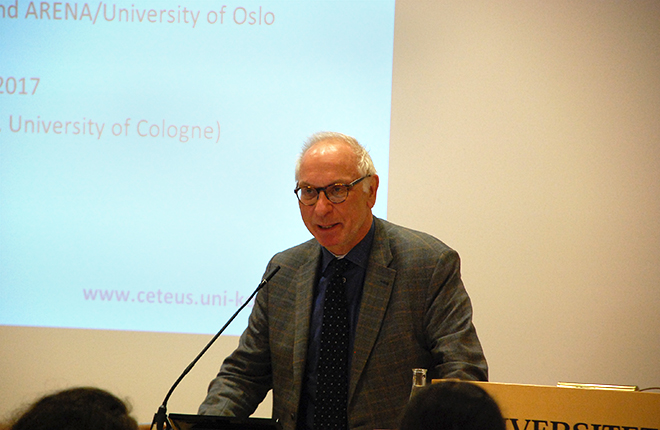 Prof. Dr. Wolfgang Wessels at the conference 'Towards a differentiated Europe' on 18 May. (All photos: ARENA)

The annual COMOS conference 2017 took place in Oslo and was organised in collaboration with the Cologne Monnet Association for EU Studies (COMOS) and the Centre for Turkey and European Union Studies (University of Cologne).

Against the background of the upcoming Brexit negotiations and the ongoing Bratislava process, this conference aimed at analysing both current dynamics within the EU and alternative forms of partnership with and within the EU. In particular, the conference focused on the future of EU-Norway relations by incorporating research from different disciplines and a practitioner’s perspective.

By organising three thematic panels, this conference did not only strengthen scientific debates but also fostered the academic network in the area of EU studies by bringing together senior and junior scholars from the EU and Norway.

The conference was organised as part of ARENA's research project Integration and division: Towards a segmented Europe? (EuroDiv). This project investigates differentiated integration and segmentation in light of the recent European crises.

Secretary Elsbeth Tronstad, the Norwegian State Secretary of EEA and EU Affairs, welcomed the participants of the conference by stressing the importance of the debate on the future of the European Union and its relations to the neighbourhood.

For a successful and prosperous future of the European Union, “unity” and “differentiation” would be key terms, Secretary Tronstad stressed. Unity, she defined, could not be taken as simple uniformity, but as “standing together” to implement shared values of the Union, to promote common interests of the Member States and to give credible commitments to common causes instead. Thus, unity would become the EU's strongest asset in solving economic, internal as well as global challenges.

Closing her speech, Secretary Tronstad gave an outlook on the common, three-fold future of the EU and Norway – as part of the EEA also part of the integration process. First, she mentioned the “democratic” facet of promoting human rights, democratic institutions and rule of law. Second is the security dimension of handling threats together in shared structures, and third, the prospect of an economically strong and sustainable Europe.

Unity is needed within the EU and between the EU and Norway. Nevertheless, Secretary Tronstad made clear that national restraints should be respected, which leads, in conclusion to differentiated integration.

The main challenge for the future will be to “manage differentiation [with respect to existing treaties] in a manner which secures unity”.

The role of the European Council

In contrast to Secretary Tronstad’s insights on the external dimension of differentiation, Wolfgang Wessels (CETEUS/University of Cologne) examined the European Council as the locus of power driving dynamics of internal differentiation. Developments of a multi-speed Europe could, therefore, be linked to this institution. The election of Emmanuel Macron, President of the French Republic, for instance, had changed the situation for a multi-speed Europe in the discussion among heads of state or government.

As to the balance among the European institutions, Wessels stressed that the European Council was “intergovernmental in nature but supranational in decisions” as it had strengthened the community method with various treaty revisions.

Considering that the institution usually decides by consensus, another important point was the power exercised within the institution. Important tools for consensus formation would be package deals, opt-outs, a facilitating presidency, the power of internal leaders and the importance for small states to sit at the meeting table. Of special interest would be whether a new wave of opt-outs would emerge. While France and Germany already announced to take progressive steps and expected other states to follow as soon as they can, Eastern European countries wanted to avoid an “exclusive club”.