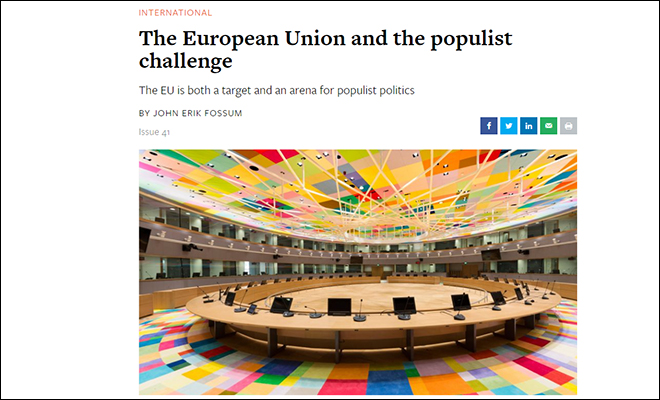 European populist movements started out as fringe groups, but their views are today becoming part of the mainstream, writes Fossum in the article. Established parties are moving closer towards populist positions, and populist parties are increasingly gaining positions of power.

'The populists' favourite target is the European Union', he continues. 'The EU appears to fit the populist stereotype of an aloof elite disconnected from the people: its movers and shakers are executives and experts, in charge of institutions without proper anchoring in the demos'.

But the EU is not only a populist target: it also fosters populism. In the European Parliament, populist parties are strongly represented – often much stronger than in their respective national parliaments. 'The EU level facilitates cross-national populist organizing and politics in Europe', Fossum maintains. Not only the nation-state but also Europe itself is worthy of protection, according to for instance Islamophobes.

'Populism thrives on crises. In that sense, contemporary Europe is fertile ground'. The aftermath of the financial and Eurozone crises is an interesting case in point. In southern Europe, where crisis hit the hardest, left-wing populism surged. In northern Europe, on the other hand, right-wing populism has been the main response. This shows that there is no direct relationship between social or economic disenfranchisement and right-wing populism.