John Erik Fossum discussed the crisis of trust of EU citizens towards the European project at the Tatra Summit 2016, a prominent conference which aims to make a lasting contribution to defining the future of EU economic and political governance. 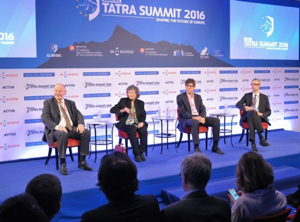 The prominent international conference GLOBSEC Tatra Summit 2016 welcomed around 1,300 guests to Bratislava in October. It took place during the first ever Slovak Presidency in the Council of the European Union and it is considered as the most important public event during this period.

During the four conference days, 100 speakers from 50 countries – including eight ministers of finance and foreign affairs and a number of special guests – brainstormed about and discussed a number of topics: migration crisis, Brexit, energy security, building Economic and Monetary Union, strengthening European internal security, combating financial criminality and fighting extremism.

The TATRA summit conferences aim to make a lasting contribution to defining the future of the economic and political governance of the European Union.

How to rebuild the trust of EU citizens?

ARENA's John Erik Fossum contributed to the debate on the crisis of trust of the EU citizens towards the European project.

See the discussions of Session 9: How to rebuild the trust of EU citizens? (www.tatrasummit.org)

The lack of trust in mainstream politics, in nation states as well as in media is a widespread phenomenon. Populist parties captured hearts and minds of citizens who are afraid of globalization, in particular the lack of social stability due to increased immigration and the fear of being left behind. The sense of injustice and the feeling that politicians don’t deal with real problems of real people bring citizens to populist ideas and disrupt the belief in the European Union, which is lacking due to the expectations-performance gap. Furthermore, it is possible to observe 2 different realities presented by politicians – one behind the closed doors in Brussels and the other on the national stage. Furthermore, experts are denigrated to irrelevant ‘taste judges’. And while the EU might have the best rock stars, national governments focus on their drug habits rather than music. In order to re-establish legitimacy within the EU, it is necessary to rethink the social contract on the level of institutions as well as individuals. The EU and politicians need to start listening to citizens and need a bottom-up revival of their policies. Mainstream politicians need to challenge populism by talking about trust, solidarity and sovereignty. The blame game is enormously destructive for the EU, therefore politicians should make unpopular statements and discuss problems and policies in an open and inclusive way. People need to understand that the EU is an interdependent concept where everyone is interdependent and thus true social solidarity needs to be established. The development of a positive inclusive vision of the EU’s future is a must.