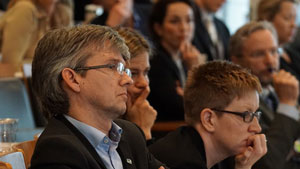 The Delegation of Norway to the EU, the Ministry of Foreign Affairs (MFA) and the Ministry of Local Government and Modernisation invited to a seminar on 'a new European administration?' in Oslo on 23 April 2015. Ingvild Næss Stub, State Secretary to the Minister of EU/EEA affairs and Paul Chaffey, State Secretary to the Minister of Local Government and Modernisation held introductions and participated actively at the one-day seminar, which was held in a crowded auditorium in the government buildings.

‘Late April I attended a full seminar on Norway’s relations with EU institutions. This is more peculiar than it may sound, for although I open or introduce quite a few seminars and conferences, I can rarely spend several hours listening to introductions by experts and discussions between ministries and directorates about how they work together on European issues on a daily basis’, State Secretary Chaffey wrote on his blog after the seminar.

Towards a European administration?

ARENA’s Morten Egeberg and Jarle Trondal held lectures on the proliferation of new administrative systems in the EU. Through comprehensive empirical studies they find evidence that a European administrative space is developing under the direction of the European Commission. This is taking place through the establishment of agencies, networks and other kinds of close and extensive cooperation between the Commission and national agencies.

National ministries on the other hand, are often not part of this cooperation. In this way, national directorates and supervisory authorities acquire a ‘two-hatted’ role as part of a national as well as a European administration. The cooperation encompasses, to a large extent and in different ways, the development of new regulations and policies, which means that subunits acquire a more prominent role in EEA-related work.

Great interest with the public administration

‘The active and enthusiastic discussions at the seminar confirmed that this is a very important issue for the public administration, and pointed to weaknesses as well as good examples of how to organise the cooperation’, the government wrote in its summary of the seminar.

More on Morten Egeberg and Jarle Trondal's research can be found here: