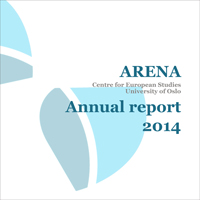 In 2014, the bicentennial of the Norwegian Constitution set much of the agenda also for ARENA’s research and dissemination activities, not least through the project The Norwegian Constitution in a Changing European Context (NORCONE). The major publication from this project, Det norske paradoks [The Norwegian Paradox] deals with Norway’s affiliation with the EU and how this affects popular rule and the conditions for Norwegian constitutional democracy. The book and its findings was widely presented and debated throughout the year. ARENA also staged a three-day conference in November on Democratic Constitutionalism in Europe, with a broad range of international scholars.

The staff produced a record-high number of publication points, and ARENA entrenched its position as the by far most productive social science research community in Norway in terms of scientific publications.

Read more about this and a range of other research activities in the 2014 Annual Report.