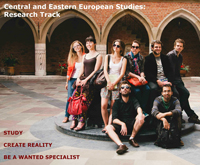 ARENA researchers will contribute by teaching in regular courses in Kraków as well as the winter school for graduate students and PhD candidates in February 2015 and a summer school in June/July 2015.

Tatiana Fumasoli from ARENA will hold the inaugural lecture of the 2014/2015 academic year at the Institute of European Studies, which will also mark the beginning of the new specialisation. The lecture 'Between excellence and relevance: The role of universities in the knowledge society' will be held on 8 October 2014 in Kraków.

Admissions for the MA programme 2014/2015 is open, please consult the CES website for further information.

More about the cooperation between ARENA and Jagiellonian University:

Research and Expertise in Society