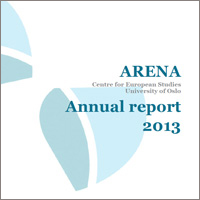 In 2013, the continued financial, social and political crises of Europe were the focus of attention of the general public as well as scholars across Europe and beyond.

As ARENA's annual report clearly demonstrates, these themes were also central to ARENA’s projects, publications and outreach activities in 2013.