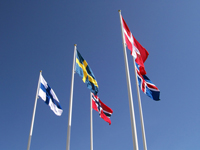 While the United Kingdom has been the focus for most discussions about Euroscepticism, citizens in the Nordic states have also displayed notable Eurosceptic attitudes. Benjamin Leruth assesses public opinion in Denmark, Finland, Iceland, Norway and Sweden. He finds that attitudes vary significantly, with citizens tending to be particularly critical of European policies which their country has opted out of. There also appears to be little public support for Iceland or Norway joining the EU in the near future.