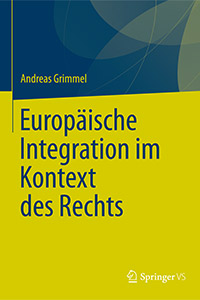 European law is a decisive factor in European integration – particularly in times of political and economic crisis. At the same time, the European community of law cannot be understood as a mere 'side-product' of political decisions and processes. Rather, it is a specific and self-contained context of integration that political science alone cannot sufficiently analyse with its conventional and generalising models of explanation. To understand 'integration through law' and the role of the European Court of Justice (ECJ) in this process – this is the central thesis – we have to deal with the European context of law as a distinct functional, historical, and local framework of reasoning and action.

Based on the works of Max Weber and Ludwig Wittgenstein this book develops the concept of context rationality, a new and promising approach to analytic theory-based integration research. Through an examination of current ECJ fundamental rights jurisdiction (Viking, Laval, Kadi and Brüstle), it is shown how a contextual analysis could offer a more profound understanding of integration processes by law – not only in Europe.

The Role of Law in Integration Theory

Theoretically driven research on the ECJ has so far focused extensively, not on the interdisciplinary project of examining and explaining integration through law, but integration generated by rational actors in the field of law. The concept of rationality and the rational-actor model, therefore, takes a central position in scientific studies, and becomes the primary factor explaining progress or stagnation in the course of integration.

Astonishingly, at this juncture, one encounters almost unanimous agreement among the different theoretical approaches on the concept of rationality. At the same time, the law itself is barely considered significant to the integration process and largely remains a variable dependent upon strategically behaving, rational actors and their various interests. Ascribing this specific notion of rationality to the ECJ, however, obstructs the view of the broad foundation of shared legal knowledge and tradition that forms the core of the common legal system, and which must form the inevitable basis for the enduring acceptance of the whole integration project.

The thesis of this book proposes that the assumption of rational actorness in the field of law is not false per se, but that the model of rationality as the core of actor-centred integration theory has to be reassessed to derive more appropriate and convincing explanations for the 'integration through law'. The basic claim is that there is not just one kind of rationality, but a multitude of rationalities that are dependent on certain social contexts. European law constitutes such a context, and should be perceived and analysed as a self-contained and independent sphere of action and thought that generates the impetus for integration.

As a consequence, Europe’s legal sphere and the processes happening within its boundaries have to be carefully distinguished from politics. Following this line of argument, it will be shown that the perception of the European Court of Justice as an actor engaging in judicial politics or politically motivated expansionist lawmaking has to be rethought. Only by examining and analysing the context of European law as an independent space of rationality, may the role of Europe’s high court in the process of integration be adequately captured.