The EU seen as supranational

Although there is a plurality of views, a majority of European Commission staff perceive the Commission as a supranational institution, Liesbet Hooghe concludes in her paper presented at the ARENA Tuesday seminar 8 June. 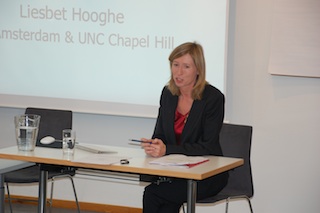 Liesbet Hooghe presented her paper "Images of Europe: How Commission officials conceive their institution's role in the EU" at the ARENA Tuesday Seminar 8 June. The paper is based on a large online survey among Comission officials.

In the paper Hooghe focuses on Commission employees' role perceptions and their perceptions of the EU project. To analyse them she constructs three ideal types: a supranational view of the role, a state-centred view and a view of the Commission's role best described as the "community method".

Three perceptions of the Commission

The "community method" represents what the EU treaties say about the decision-making authority, namely that the Commission is important because it initiates policy proposals. These must be implemented by the member states. The Commission staff's role is thus to identify common needs and propose solutions that surpass national and cultural differences.

Want to read more? The entire paper can be downloaded here (pdf).

Hooghe's study is part of a larger ongoing project funded by the British Economic and Social Research Council. The project, called "The Commission examined: Challenge, Change and Performance", involves a quantitative study and a series of semi-structured interviews with Commission staff.

Liesbet Hooghe is Zachary Taylor Smith Professor at UNC Chapel Hill and Chair in Multi-Level Governance at the VU Amsterdam. Her research interests are the EU and Europe. She is known as one of the pioneers in multi-level governance research. Her interests also span the fields of political parties and public opinion, identity research and European integration.