The Forum for European Research on 22 March addressed the increasing influence of the European Parliament in the decision-making system of the EU in this year's meeting. State secretary Erik Lahnstein and three researchers in the field of the EU presented examples on how the parliament has gained more power recently. 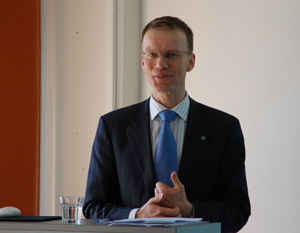 State Secretary Erik Lahnstein stressed the fact that the European parliament has become a real force in the EU on an increasing number of policy areas, at this year’s Forum for European Research. (Photo: Sindre Hervig, UiO)

In his introduction State Secretary to the Ministry of Foreign Affairs Erik Lahnstein stressed the fact that the European parliament has become a real force on an increasing number of policy areas in the EU. This is signified by the fact that high ranking national politicians are increasingly seeking out this institution.

Lahnstein also pointed out that growing influence of the Parliament has repercussions for the Norwegian way of trying to influence the EU which has traditionally been aimed at the Commission. His personal experience was that politicians played an independent and important role in influencing the processes in the European Parliament. Working on a Civil Service level was not enough – joint, transnational political advances are often needed.

Furthermore Lahnstein pointed out that the Norwegian debate on Europe has gained momentum lately, partly because of the European Reports’ debate series. It is a good thing that questions regarding European policy can be discussed without falling into to traditional ‘yes’ and ‘no’ positions. Professor Christopher Lord from ARENA argued that the EU system is moving towards a parliamentary system of government. (Photo: Sindre Hervig, UiO)

Professor Christopher Lord from ARENA spoke on the appointment of the 2009 Commission, and discussed that not only could the European Parliament throw the Commission, it had gained an increasing influence of the composition of the Commission. He argued that the EU system is moving towards a parliamentary system of government. Ph.D. Guri Rosén from ARENA argued that the informal power of the European Parliament has been gradually formalised. (Photo: Sindre Hervig, UiO)

Researcher Bjørn Høyland from CICERO - Center for International Climate and Environmental Research showed the patterns of political coalitions in the European Parliament. His research suggests that the Parliament voted in clusters following party dividing lines. There are few clusters that could be explained through economical or geographical dividing lines, for example there was no North-South dimension.

He also pointed to the fact that the matters discussed in the European Parliament were increasingly settled in the first round, and that the respective spokesperson could increasingly influence the outcome of singular cases. This has perhaps been taken so far that there are considerations to adjust the procedures.

Towards the end of the session the participants at the Forum were given the opportunity to present their research projects in the field of European policy.

By Maria Martens, Ministry of Foreign Affairs
E-mail this page

Forum for European Research is a meeting place where the government, represented by the Secretary of State on European matters, the administration and researchers discuss research on European policy. The forum is annual.

This year's meeting was organised by ARENA Centre for European Research, and the subject was the increasing significance of the European Parliament in the decision-making system of the EU.

The Ministry of Foreign Affairs